The Commander Series has been on a hot streak the last few years, and if you’ve been waiting for previews to see if the streak will continue/to make preorder decisions, wait no more: all C18 cards are public as of today, so we can finally start showing them off.

Here’s the short version of the what’s inside Commander 2018: 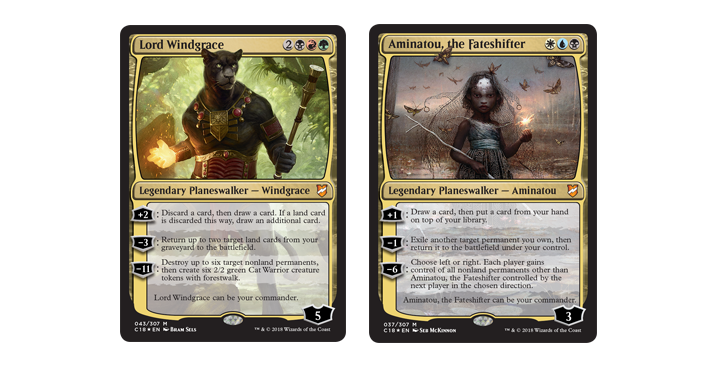 We’re not trying to hide it: these decks are powerful.

Planeswalkers that are legal as Commanders have been printed once before, but Commander 2018 ups the ante. Each Planeswalker supports a beloved strategy, but each one adds a twist—clear themes and subthemes add incredible depth.

Plus, Commander 2018 has an all-star supporting cast. 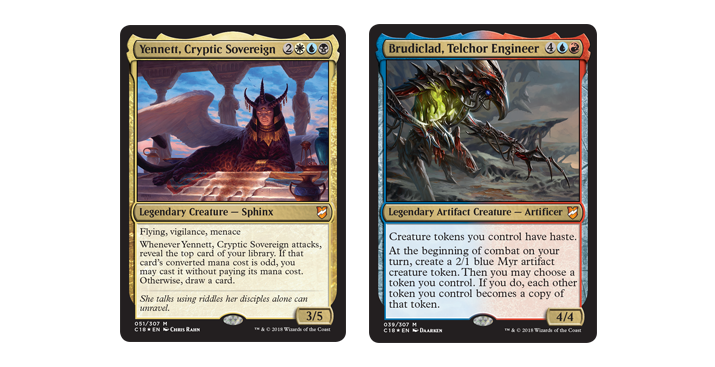 For many players, the yearly Commander release serves as an entry point into the format. As such, the decks contain a few “goes-in-basically-every-deck” staples, plus a few stapes-in-the-making. 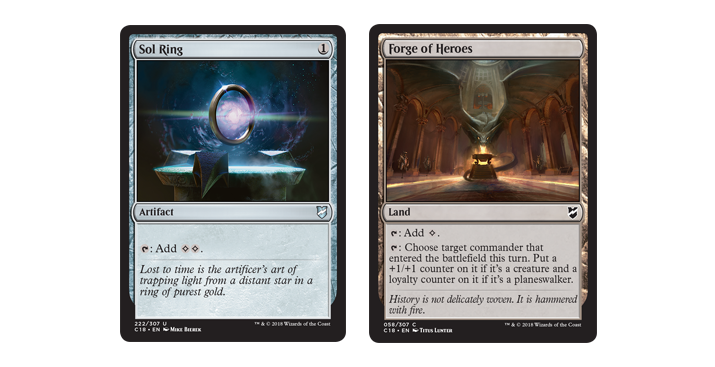 If you’ve got players looking to get into Commander, there’s no way around it: they’re going to want these cards.

Sol Ring has warped every game it’s ever been played in, ramping a player into four mana on turn two. Forge of Heroes gets work done in literally any deck, and Geode Golem, like any card that breaks format rules, shouldn’t be overlooked. 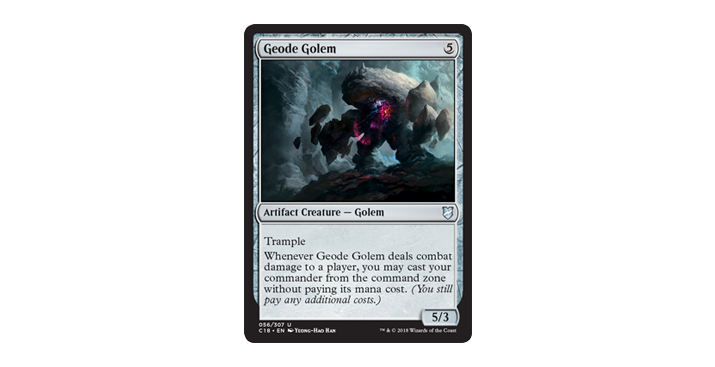 Part of the success of the Commander Series thus far has been that your players can pick up the decks and immediately play with Commander regulars—they can join your Commander community with just one purchase. A lot of that has been to do with the stellar reprints. C18 follows suit. 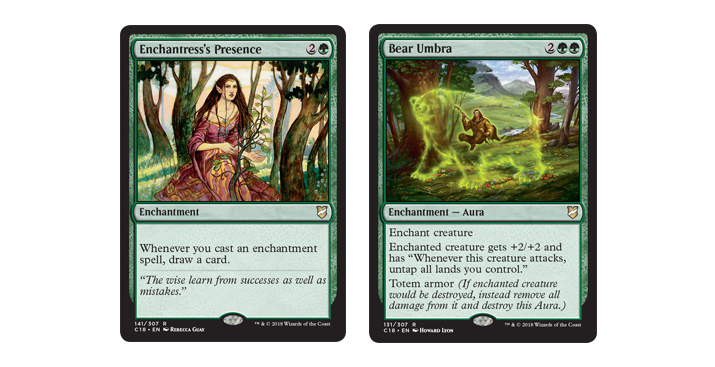 Bear Umbra does a lot of heavy lifting, both protecting your Commander and doubling your mana. Enchantress’s Presence is a crucial card draw engine for green-based enchantment decks.

Much of Commander’s appeal is that you get to build decks based on narrative themes rather than power level. A lot of players are less interested in raw muscle or perfect efficiency and more interested in maximizing flavor or developing strange new strategies.

C18 is a great pick up for that kind of player. 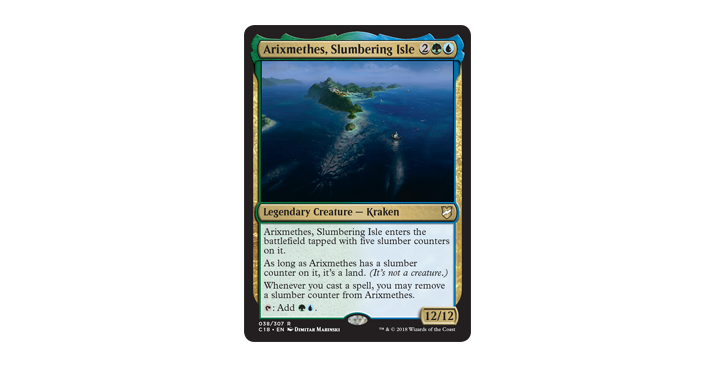 Arixmethes unlocks worlds of potential and tells a delightful story, and we’re certain players will be eager to experiment with Slumbering Isle. Treasure Nabber turns traditional Commander gameplay on its head, and Crash of Rhino Beetles is just big dumb fun. 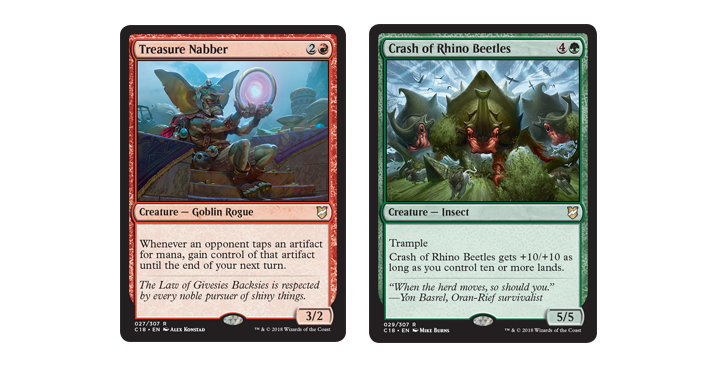 Each of these cards are windows into Magic lore and open up whole new build-around decks. Deck builders will rejoice.

Part of what makes each new Commander release special is the rush to find the most powerful new cards. Some players enjoy the ever-escalating arms race within their playgroups, other players love the influx of new cards into Legacy and Vintage.

And if you’re looking for raw power, Commander 2018 delivers. 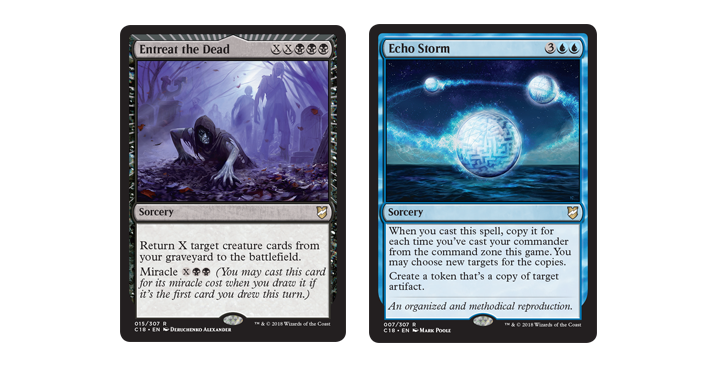 Echo Storm, along with the other cards within the cycle, invert a traditional Commander pain point. Entreat the Dead and Saheeli’s Directive are reimagined classics, while Sower of Discord creates a whole new political experience. 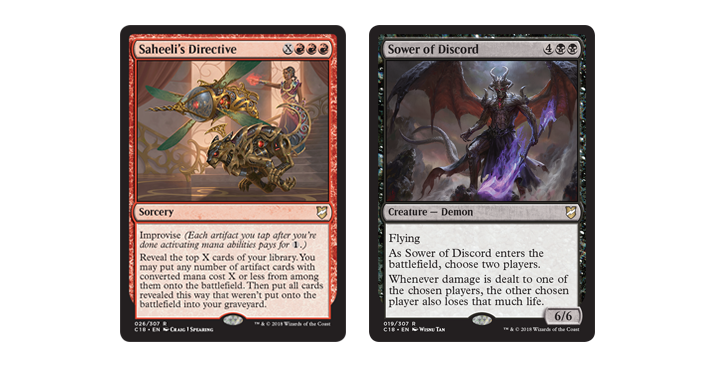 Each Commander 2018 deck has a masterfully-crafted combination of new cards, fan-favorite archetypes, and dynamite reprints.

Place or boost your preorder today.