From Ad to Prerelease: The 4 Steps Players Take

From Ad to Prerelease: The 4 Steps Players Take

In the lead up to a new set, we run a lot of ads driving players out to stores.

For players, the path from those ads to your store is pretty straight forward. They'll see it, click through to the store and event locator, preregister. They'll show up, play, maybe pick up a box.

But for the store, each of those steps requires an action on your part to make sure you don't miss out on those sales and Tickets. Miss a link in that chain and that player will still do Prerelease—just not yours.

But don’t worry. It's easy to keep them on the path to your store. Here's a step-by-step guide to how.

While players are scrolling through social media or getting ready to crush opponents in Arena, they’ll see ads for FNM, Prerelease, or another in-store experience. When they click through, they land on the Store and Event Locator.

Here’s the first chance for early scheduling to make a difference.

These ads usually start about a five weeks before the set launches. If you’ve already scheduled your events by that time, the events show up in the player’s search.

If you haven't? Then not only will your event not appear, but your store won't appear at all—the locator defaults to show events, not stores. So you're already out of contention before player even reaches step two.

The point here is basically the same as step one (get your events on the books as early as possible—specifically Prerelease), but it's worth reinforcing how the updated store and event locator works.

The old locator returned searches with a list of stores, sorted by distance from the user. Now it returns events—sorted by date, not distance. This means that, rather than scroll down a list of events to find Prereleases, the user will typically just hit the Prerelease filter. 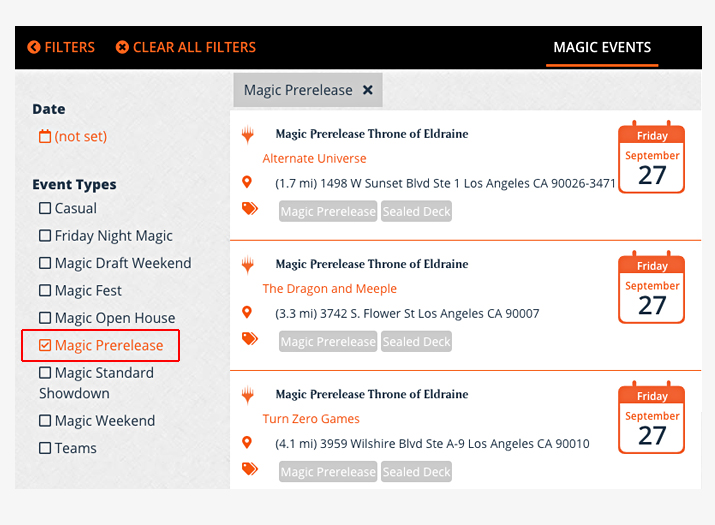 The ads usually include a call to action for players to preregister. After finding the best event for them (hopefully yours!), they'll reach out to do exactly that.

That only happens if your store has preregistration open by then, of course. And you should.

Preregistration makes sure all the marketing we do is actionable.

Think of it this way. By this time, preview cards are drumming up buzz on social media, the set's trailer is blowing minds on Youtube, and point-of-purchase materials are building excitement in-store. But without preregistration, there isn't much for players to do with that excitement.

Plus, Prereleases sell out, and players know it. If your store isn't taking preregistration, then you can't guarantee them a spot. So they'll find a store that can.

Step 4: Picking Up a Box

Finally, it's Prerelease. Those new players made it to your store thanks to your early scheduling, helpful details, and preregistration. Go you!

And, for Throne of Eldraine only, they've got an extra incentive to pick up box—they can get a Collector Booster along with it.

Around September 20, you'll get your Buy-a-Box promos, like usual. The same shipment will include a quantity of Collector Boosters based on your metrics.* Give these out as part of the Buy-a-Box and Prerelease Early Sale promotion, in addition to the Buy-a-Box card.

And note that supplies are limited: you'll have more Buy-a-Box promos than Collector Boosters. Use that to create urgency around the promotion.

Of course, all of this is moot if you don't sign up for Prerelease. So, if you haven't, now's the time!