Duel Decks are going out with a bang. Duel Decks: Elves vs. Inventors is the final installment in the series, and one of the best.

Here are some of the highlights to help you promote.

This final scenario features a war of ideology between the mighty elves, preservers of nature, and innovative inventors, proponents of artifice.

Led by Ezuri, Renegade Leader (a perennial feature of elf decks across formats, here with foil treatment and alternate art), the elf deck attempts to end games quickly with mana acceleration, casting a horde of elf creatures and raining +1/+1 counters on them.

We've also got something special planned for Ezuri in this release, but more on that closer to the sale date.

The elf deck also features Elvish Archdruid with new art, Regal Force, Sylvan Advocate, and plenty of other strong cards. Not only are these cards potent in this product, they're useful in other formats like Commander and Modern.

Duel Decks began with elves as one of the featured factions, so it's fitting the line concludes with this iconic creature type. And who better to challenge them then their very antithesis?

The inventors deck seeks to repeatedly reuse its artifacts to survive the early elf aggression and take control of the late game.

The red and blue deck comes with a foil, alternate art Goblin Welder (another multi-format heavy-hitter) to bring back key artifacts from the graveyard. 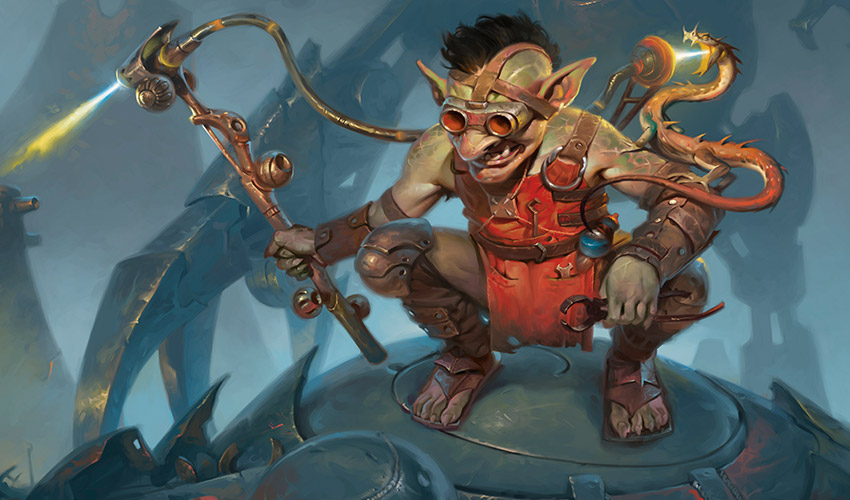 Duel Decks: Elves vs. Inventors comes with two 60-card decks, ready to play right out of the box.

It's that ready-to-play factor that makes Duel Decks a point of articulation for different player types. The primary audience is long-time fans, but ultimately the product's value is its ability to reach across experience levels.

Veterans pick up Duel Decks as a way to battle with less-experienced friends. It's quick and easy, with guaranteed synergy, a level playing field, and no deckbuilding required. Long-time devotees revisit classic staples with a pang of nostalgia while newer ones get a glimpse of Magic from before their time.

That's the main audience—long-time players looking to share Magic with newer ones. Preorder today and put Duel Decks: Elves vs. Inventors in their hands on April 6.