The First, Most Important Thing about Conspiracy

The First, Most Important Thing about Conspiracy

Most gaming happens in one of three places: online, at home, or in stores. The appeal of the first is convenience—opponents on demand. The appeal of the second is face-to-face interaction—play experiences made richer because they're shared.

Game stores combine the appeal of both. Organized play is a kind of hybrid matchmaking/party planning service—a great TO wins by designing, hosting, and documenting social events.

Perhaps more than any other Magic product, Conspiracy: Take the Crown is a social event in a box. 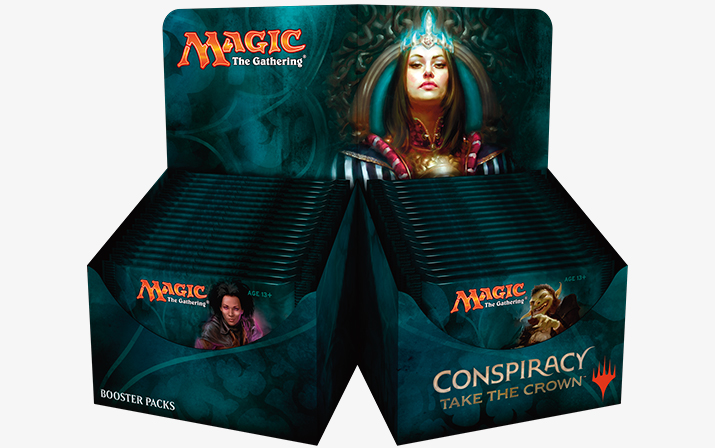 Conspiracy is designed specifically to be drafted. Every single pack includes at least one card that affects the game in ways normal Magic cards can't—they alter the draft itself, they alter deckbuilding, the text of other cards, and so on.

That opens up space to create novel interactions between players, mechanics that upend expectations, and startling moments unlike anything else in the game.

For just one example, take a look at Archdemon of Paliano: 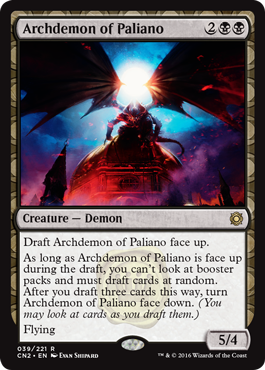 Draft Archdemon of Paliano face up.

As long as Archedmon of Paliano is face up during the draft, you can't look at booster packs and must draft cards at random. After you draft three cards this way, turn Archdemon of Paliano face down.

Now's as good a time as any to confess: the original Conspiracy set is my favorite draft format of all time—and it's not close—because of cards like Archdemon of Paliano.

I love cards like this because the in-game effect doubles as an out-of-game spectacle—its value isn't just the stats; it's the laughs. The downside for your draft deck is an upside for the draft experience. It magnifies the social experience of Magic.

There are dozens of other cards in Conspiracy that do the same, and creating positive memories by hosting those experiences in your store is what Conspiracy is all about.

Interactions like the Archdemon's create high-emotion gameplay moments that quickly come to represent the entire event in a player's memory.

People judge an experience mostly by the strong emotions they feel, whether good or bad—factors like time spent or even the overall impression matter far less.

Behavioral economists call it "the Peak-End Rule"—an academic term for what everyone reading this probably knows already: creating positive experiences is the first, most important thing. It's rule one.

Think of Conspiracy as tool to enforce that rule. Sure, it's got anticipated reprints, and it's got potential to alter eternal formats, but the main goal is simple: make fun happen.

So celebrate the launch with some draft events next weekend!