Get More out of Modern Masters

Get More out of Modern Masters

Rather than selling a booster display to just one person, spread the love to eight!

A single display of Modern Masters 2017 Edition can support a truly epic Booster Draft experience for eight players. The draft pass can help you capitalize on this idea by encouraging players to draft their booster display in-store with their friends.

Meanwhile, Erik of Phyrexian Games took the idea of the draft pass one step further.

A Trophy to Last a Lifetime

One of Erik's regular players wanted to do something special for him and his shop as a "thank you" for years of fun. 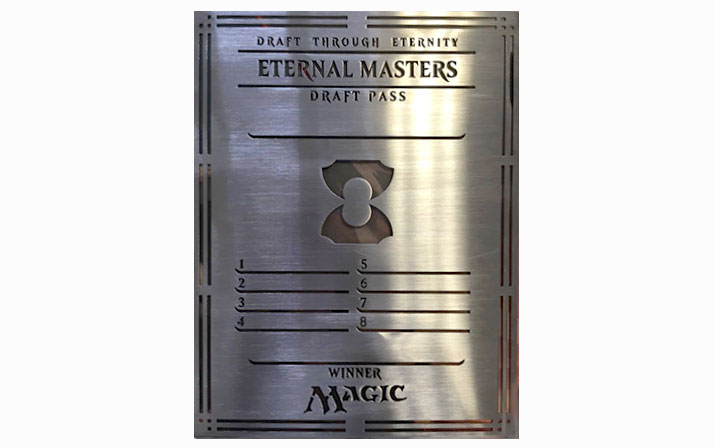 Erik's Facebook page blew up with buzz and excitement for the unique idea, increasing overall social media engagement as well as interest in Eternal Masters at his store.

There was more social media attention than a very large majority of my posts, the Facebook page got new likes, and drove a few new players into the store and to my website.

The winner of this special draft event had the opportunity to engrave the names of all eight participants on the trophy—with their name right at the top!

The unique approach to drafting a beloved series certainly paid off in dividends for Erik, with an increase in overall event attendance and word of mouth that earned him a few new faces at his store.

Run Your Own Draft Event

Try running your own special draft event with Modern Masters 2017! You can download the draft pass now on our marketing materials page, under event accessories.

Though you may not have access to a metal shop, you could consider fancifying the draft pass reward in other simple ways, from printing it on high-quality card stock to offering a custom canvas print.

How will you spread the love with Modern Masters 2017?