When Magic first took off, most stores simply sold a product. Players came in, they paid for their boosters, they went home to the kitchen table.

Then in-store events became the norm, and players didn't come in for the product so much as they came in for opponents—a kind of match-making service.

In the last eight months, Justin Vickers of Shortstops has grown his events by 20% by tailoring his events to do just that.

Why the Initial Strategy Didn't Work

At first, it seemed to be working.

Justin drew players to his events with big rewards focused on the top of the standings, routinely bringing in thirty players for FNM and high teens at weekly events—their Monday "win-a-box," for example.

But then things got sticky. With a big payoff at stake, players weren't content to call it a night until first place was determined unequivocally. This meant events would sometimes run as late as 2:30 a.m.—and most players went home with nothing to show for their endurance. 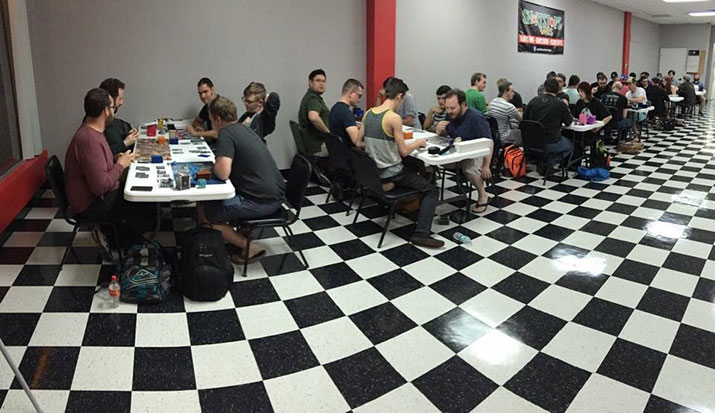 Bit by bit, his audience shifted. It takes a certain kind of gamer to play in those conditions, and while those gamers certainly have their place, they occupy just one small plot on the Magic landscape.

Justin's events became a keyhole view of that plot. The big payouts and late nights were a draw for some, but the tension and the time commitment made a poor experience for everyone else.

"I thought half my player base was at risk."

Even with his audience on the line, Justin pivoted toward an experience-driven model.

He reduced the tension by spreading rewards throughout the standings.

He reduced the time commitment by capping the number of rounds at four.

When the store relocated in July 2015, he reimagined his play space, making every decision with the social experience of Magic in mind.

That Shift Triggered a Virtuous Cycle

And it only took a few simple tactics, all in service of a simple goal: set the stage for a great experience.