Jumpstart is a whole different way to play Magic, and players can get their first taste of it as part of the Core Set 2021 Buy-a-Box promotion: we're sending WPN members an allocation of Jumpstart boosters to give out with the purchase of a Draft Booster box, Collector Booster box, or six Prerelease Packs.

The boosters will arrive between now and the release of Jumpstart, so make sure to let your players know there's an even better bonus that usual when they pick up a box.

For newer fans, Jumpstart is quick and easy to get into—deckbuilding without the deckbuilding. For more experienced fans, it's a welcome change of pace, and it's loaded with cool reprints and new cards.

The play format is unlike anything Magic has done before. At first glance, it's a simple, pick-up-and-play experience. Open some boosters, shuffle two together, and you’re ready to go. But a closer look reveals a rich, intricate play experience that's never the same twice.

Let's take a peek inside.

Players start with a set of boosters (they can get their first two from the M21 Buy-a-Box promo), then open them to discover their themes. You'll know which themes you're getting from the theme cards inside: 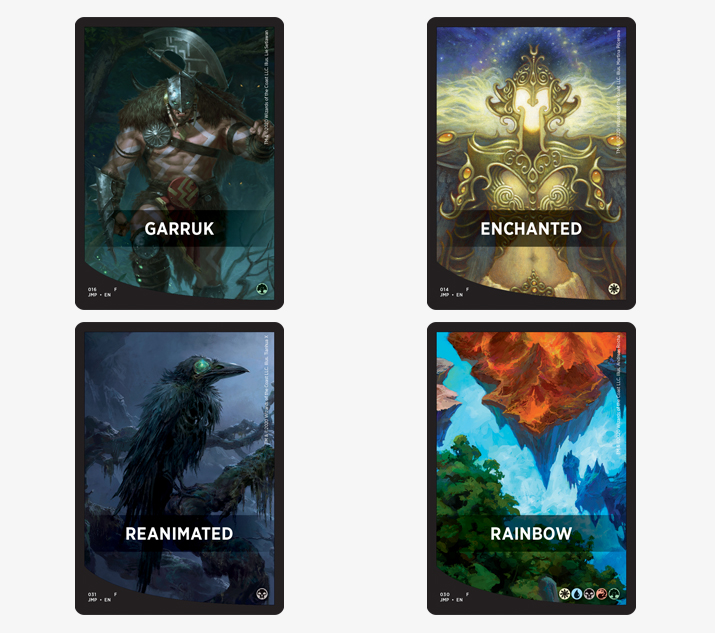 Okay. If all you need to know is how Jumpstart works, you can stop reading right here. It's couldn't be simpler. Pick two themes, shuffle them together, and play. That's it. But if you want the nitty-gritty, read on.

There are any number of ways to "build" your deck. The usual way is to open four packs, then choose the combination of themes you like most. So, if you opened the themes above, you might go with "Enchanted Garruk" or "Reanimated Rainbow," or any other combination of the four. (For Jumpstart Launch Party, the recommended format is to just grab two boosters and get started.)

You'll know the theme before you know what cards are in the pack. The cards themselves are obfuscated inside the pack—you'll know it's got rainbows and you'll know they're enchanted, but that's all you'll know.

There are forty-six possible themes, and most themes have several variations—there are four different possible "Reanimated" packs, for example. There are 121 possible card lists inside any given booster, including a handful of "mythic rare" themes that only have one possible list.

That makes 14,000 possible decklists—enough that every game of Jumpstart is going to be a new experience. So, let's say you go with "Reanimated Rainbow." In one pack, you'll find cards that fit the "Reanimated" theme and in the other, cards that fit the "Rainbow" theme, plus all the lands you need to play—including one basic land with magnificent new art that fits the packs theme.

And there's all sort of other goodies—favorites from M21, 37 new cards, and almost 500 reprints. We're only a few days into previews, so there's a lot of great stuff still to be revealed. Stay tuned for more, and don't forget: you can schedule Jumpstart Launch Party in Wizards Event Reporter or Wizards EventLink at any point over the event weekend (July 17–19).