A D&D campaign is only as good as its Dungeon Master. 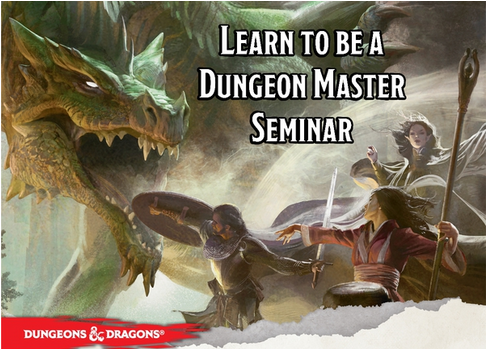 With students ranging from uninitiated to immersed gathering at Adventurer’s Quarter, Robert’s seminar aims to deepen the pool of local DMs while raising the level of quality.

It’s working. Robert’s hosted two sessions with six students each, and many of them have since taken up DMing permanently.

Here’s how he’s doing it:

Like D&D itself, Robert is all about the narrative, so he goes over the rules fairly quickly. “A good understanding of the rules makes the game flow and is great to have, but it’s not necessary.”

Hour one is spent flipping through the D&D Starter Set Rulebook, only lingering on newer concepts like Advantage.

The good stuff comes in hours two and three. Robert gets behind the DM screen and orchestrates an encounter (also drawn from the Starter Set), followed by a debriefing where he elaborates on his decisions, like how he chose to handle a certain ability check or why he chose to alter the adventure as written.

Hour four focuses on DM-specific issues, like the differences between home play and public play, when to use the “Read Aloud” text, or using Meetup and Reddit to expand your group. 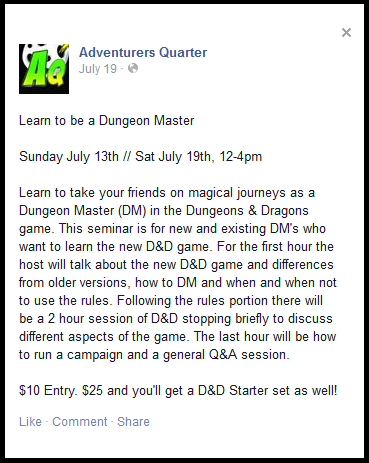 What Makes a DM Great

He also drills home the maxims of a good DM:

Every decision should be made with the players in mind. “A good DM wants everyone at the table to have fun.”

The fifth edition of Dungeons & Dragons brought with it a host of new in-store play offerings, and a host of new players storming local WPN locations to find them. But as Robert warns, “If the DM is not so great, they might not come back.”

So whether you’re recruiting them or creating them like Robert, starting growing your DM community right away!