As a WPN member, you're working on two timelines: the player's, and your own.

Right now, for example. Modern Horizons hype season is about to fire up in earnest, and once previews start rolling out, it'll eclipse everything else in the Magic community. But not the retailer community. Supply runs on different clock than demand—you've got Core Set 2020 (M20) to think about.

M20 scheduling is open now, and it launches a whole new paradigm with event scheduling—one with new flexibility, new perks, and new opportunities to take advantage of.

The new Store and Event locator (SEL) is officially live, it's expected to get literally millions of views between now and M20 Prerelease.

Here's something you should know about those views: players are browsing events, not stores.

It a small but simple, no-downside tactic to get an edge on competitors that procrastinate on scheduling. In the coming weeks, countless players will browse the SEL for Modern Horizons Prerelease, and when do, they'll hit the "Prerelease" filter. Get M20 Prerelease scheduled and they'll see that, too. 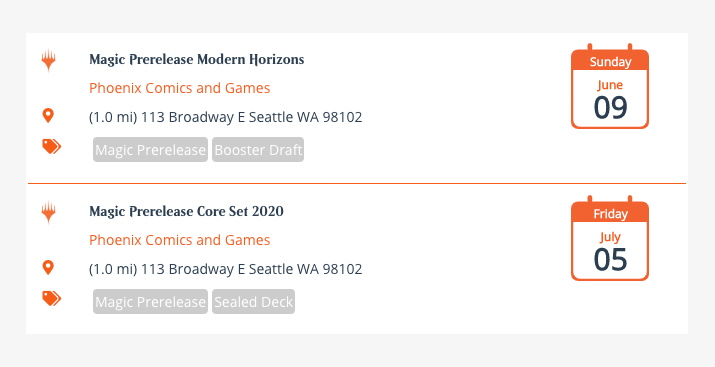 And as a little bonus, the SEL ranks events by distance from the player—which means, if you're the closest store, your M20 Prerelease will appear ahead of all Modern Horizons Prereleases, even though that's the next on the calendar.

An overlooked perk of the new Wizards Play Network is that, to some degree, we get to collapse the player's timeline with your own. Here's where they merge.

This is when your kits will start showing up, which means preview cards will start rolling out around the same time. Since that's when player interest in Core Set 2020 will peak, we strongly recommend you get your Prerelease scheduled no later than June 14.

That said, it's a "soft" deadline because scheduling will stay open until Prerelease is over. So long as you can get product from your distributor in time, you can run Prerelease, regardless of when you schedule.

Here's what's coming in the kit:

If you're WPN Premium, you'll get a second kit beyond this one. Get a preview here.

When you log into WER to schedule your Prerelease, there are two things you should know: 1) you can run Prerelease on Friday. Get more details here. 2) You can run up to nine Prereleases.