Most haven't. That's one of the reasons Battlebond—set to release on June 8—might be different than what you're used to. It's designed specifically for Two-Headed Giant, with cards, flavor, and mechanics that fit that theme.

Plus, there are a few things that work differently in this set. For example, take a look at the first preview cards: 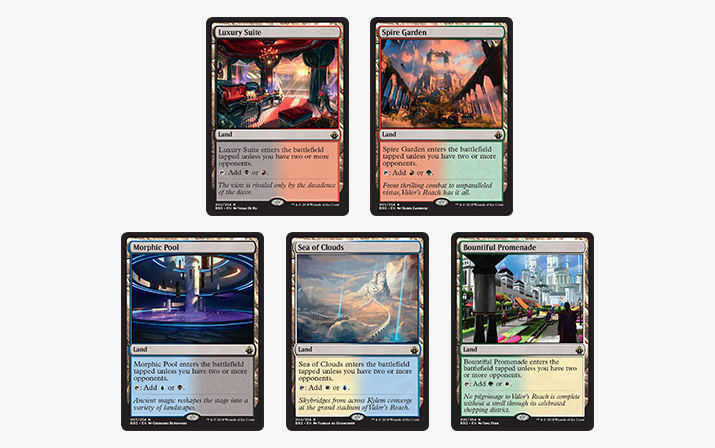 You read it right. So long as you're playing multiplayer, these are dual lands with no downside. They're an auto-include in just about any Commander deck, plus they'll be available in foil.

That's just one of the ways Battlebond breaks from traditional Magic gameplay. There are plenty more, and you'll see them when previews start on May 21. In the meantime, here are a few more things you should know about the set:

If you've ever run a 2HG Prerelease, you know that 2HG Sealed Deck usually uses eight packs. For Battlebond, we're recommending six. You can do eight if you prefer, but make sure that's known in advance, since players may be expecting six.

If you were one of the less than 1% of stores that ran a 2HG Draft last year, you might expect to do six packs for 2HG Booster Draft. But again, we're recommending different rules for Battlebond:

Preview Events Are Different Than Prerelease

The Preview Events coming June 2–3 are a chance to run Battlebond early and get the product into players' hands before it goes on sale online and in stores outside of the WPN. But they're different than Prerelease.

Admittedly, it's a little confusing. Preview Events showed up as "Prerelease" in WER, but they should be showing as "Preview Event" now. Battlebond Preview Events are just that: a chance to preview the set. Unlike Prerelease, they are run with normal booster product, and prizing is entirely at the store's discretion.

Battlebond is primed to create a special experience for players of all experience levels. Use this info to help set player’s expectations and gear-up for your Battlebond preview events on June 2–3!