Video: How to Assemble & Use Your M19 Intro Display

Video: How to Assemble & Use Your M19 Intro Display

Core Set 2019 is the best entry point for any potential Magic player. To help you capitalize on the set's recruiting potential, we're sending you some acquisition tools—including this Magic Intro Display.

Watch the following video for tips and guidelines on how to best use this resource to attract new players to the game. (For a full transcript of the video, click on the button below the video.)

The Magic: The Gathering Intro Display is an exciting new tool to grab your customers' attention and start them on the path to playing Magic.

The display is best used as an introductory experience. Set up a quick, 5-minute scenario that highlights the game's strengths.

You can create your own scenario, or use a sample found on the Wizards Play Network website.

Even if an employee isn't available to run the scenario, the display comes with an info holder, which provides a self-guided experience for prospective players.

Fill your event holder with customizable event flyers to help lead players toward organized play at your store. You can download and print flyers from the marketing materials section of the WPN website.

Place the Intro Display near the front of your store, in an area that will capture your customers' attention. If you don't have floor space for the entire table, the Welcome Deck display can detach for use on an island display or your point-of-sale counter.

The table is also collapsible, so you can easily take the Intro Display to a convention or off-site event to help recruit new players.

Wherever you use the Magic Intro Display, be sure to invite the customer to choose one of the five Welcome Decks and then encourage them to sit down for a learn-to-play demo using the official Core Set 2019 Flip Book.

For this sample scenario, open one red and one green Welcome Deck and use the cards in those decks to create the battlefield and hands depicted in the following image: 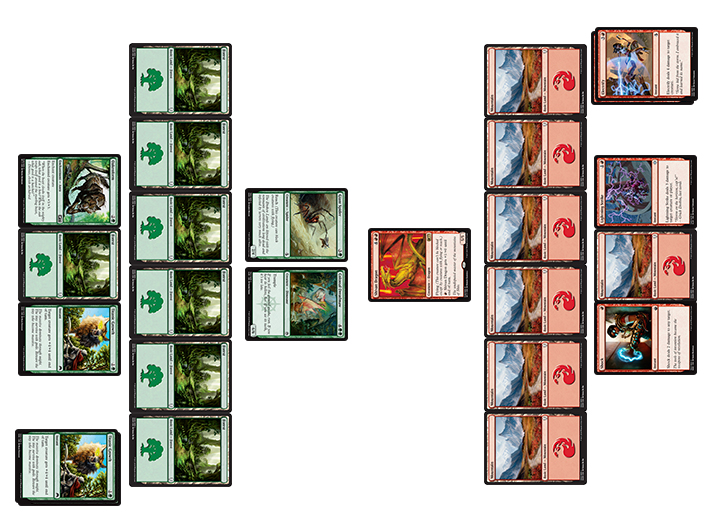 This sample scenario has been set up to allow either the red or green player—whichever side the customer is on—multiple routes to victory and should take about five minutes in total.

Briefly explain the premise of Magic, what their goal is as a player in this scenario, and give a basic overview of how creatures and lands function.

Then let them take their turn, having them draw a card, and see if they can figure out how to win on their own. Feel free to give small hints to point them in the right direction if they are struggling. If the customer finds the scenario too easy, you can increase the difficulty by increasing the life totals by a few points.

Afterward, encourage them to take a Welcome Deck of their choice and lead them to your Learn-to-Play area for a full tutorial of the game.