You Should Be Firing More Drafts

You Should Be Firing More Drafts

The Magic ecosystem is always in flux. Players lapse, return, migrate between formats. New decks surge and recede. If you're invested in the success of the game, you're constantly adapting and innovating to keep players sitting down and shuffling up.

Four weeks into Hour of Devastation, one things seems clear:

Now's the time to be firing drafts.

First off, reviews for the Hour of Devastation Limited environment are great. Attendance skyrocketed over Draft Weekend, and not just because of the crowd-pleasing promo. But there's another reason, beyond the quality of the set:

Standard is in a good place right now. There's variety. There's a low barrier to entry. One particular deck (mono-red aggro) ran away with the Pro Tour, but the metagame is expected to adjust quickly. However a player chooses to have fun playing Magic, there's a place for them in the current Standard.

All that adds up to a strong forecast for Standard's health over Hour of Devastation season. Which means that if you use drafts and Sealed events to get HOU cards into your players' hands, there's a good chance they'll play with them.

And the timing couldn't be better—Hour of Devastation season brings a lot of advantages to help you fire more drafts.

All promo items from Amonkhet and earlier can help boost attendance.

There are other advantages too. Such as: 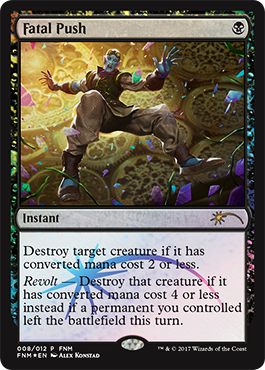 These advantages give you the leverage you need to fire more drafts. Doing that will help get more cards into your players' hands. And doing that will ultimately drive more players toward Standard.

Here's a simple way to get started:

Set a goal for the season, and use these advantages to meet them.

Hour of Devastation season runs until September 29, when Ixalan ushers in a new draft environment. Between then and now, how many drafts can you fire? Could you go a third above your average? Could you double it?

Between the quality of the set, the promo lineup, and recent policy changes, we think you can.