We learned a lot from the launch of Ikoria: Lair of Behemoths. From the logistics of At-Home Prerelease to unconventional uses for Promo Packs, a lot has shifted within the Wizards Play Network to accommodate for the current Magic landscape.

As Core Set 2021 Prerelease approaches, we want to continue making those shifts to keep enabling stores to create the most successful launch possible while prioritizing the safety of your players and staff.

With those goals in mind, we made the following adjustments to events and promotions for Core Set 2021 season—keep them in mind as you schedule your events (which you can do now)!

In order to help organizers maximize overall attendance while limiting the number of people in their store at any given time, we're lifting all limits on the number of events you can run for Core Set 2021 and making Prerelease events available all the way until Thursday, July 2nd.

For example, if you're restricted to hosting, say, ten people in your store at a single time, you can run events with eight people and three rounds all week and still have strong participation overall.

Note that this could also allow friend groups to sign up together and enable organizers to run an event just for that group—private Prereleases, essentially.

Note also that these dates apply for the Prerelease Early Sale Promotion as well—you can sell advance boxes of Core Set 2021 between June 26 and July 2.

There's a lot to know about the Prerelease Early Sale and Buy-a-Box Promotions this time around—more flexibility, and more value to help you drive those sales.

One—Starting at Prerelease, the M21 Prerelease Early Sale Promotion is extended beyond full boxes. You may sell Draft Booster Packs in any quantity. Buy-a-Box promos should be used as a reward for full box purchase only, though, with one exception:

Two—Just like with Ikoria, you can hand out Buy-a-Box promos to anyone buying six Prerelease Packs. And you can give them a little taste of the next set, too—specifically: 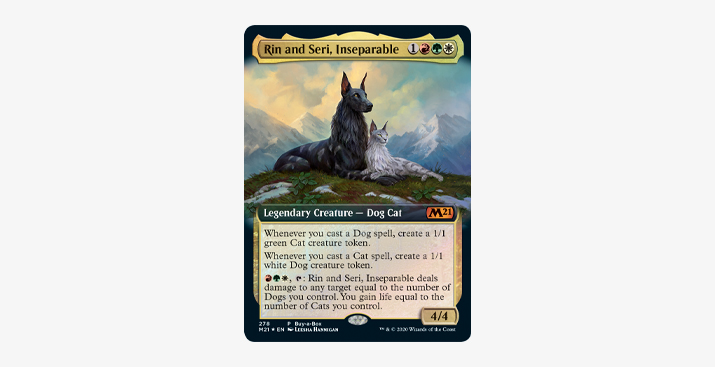 M21's Buy-a-Box promo, Rin and Seri, leans into the dynamic of Core Set 2021 and Jumpstart with an unlikely pair teaming up to conquer the battlefield together.

Opening weekend is all about Limited play. For Core Set 2021, we're celebrating the new set with an alternative limited experience: Sealed. It's a great opportunity for players who look forward to the excitement of checking out new cards without being required to bring their own deck or to exchange cards with other players.

At-Home Prelease is also available again for Core Set 2021, which leads us to some additions to our Buy-a-Box rewards for this set.

Sure, M21 has insane reprints, like Grim Tutor and Azusa. Sure, it's poised to shake up Standard in a way that core sets seldom do. But we all know what's really going to make M21 a hit—dogs and cats!

M21 is loaded with both (we've even given the creature type "hound" an errata to make them dogs), and we're launching a promotion today to both spotlight this theme and help drive preorders. Here's how it works.

When you take preorders, ask customers "dogs or cats?" and note their response. Then, in late June, we'll send you two sets of codes—one for dog fans, one for cat fans. Send those codes out according to the customer's preference, at which point they can unlock either a dog or cat sleeve in MTG Arena.

Meanwhile, once players begin redeeming codes, we'll keep a running tally of dogs vs. cats, and announce the results in July.

*Available only in certain regions

Much like a week of Prerelease allows organizers maximize attendance and minimize the number of people in store at once, multiple Commander Nights allow plenty of opportunity for players to experience new, global Commander rules and challenging achievements.

Stores can schedule one Commander Nights event per night any day of the week besides Fridays between July 6 and September 17.

Scheduling for Commander Nights and the rest of Core Set 2021 and Jumpstart events are open in Wizards EventLink and Wizard Event Reporter now.