By now you’ve heard about the official WPN Promo Packs, the new consolidated prize material that support all in in-store play. This is an exciting time, because stores have the flexibility to customize the promo pack usage to fit the local player community.

Here’s what we are doing to ensure the packs reach the right audiences and create the metrics by which we can get more packs!

First, my staff determined it would be best to use the Promo Packs only for Standard, Sealed, and Draft events. This way we get better value per Ticket.

Tickets in Standard, Sealed, and Draft count toward our metrics twice (once for Tickets and once for Engaged Players). And, even if that weren't the case, players for formats like Modern and Legacy don’t really want the packs anyway (or at least they don't want them to play with). 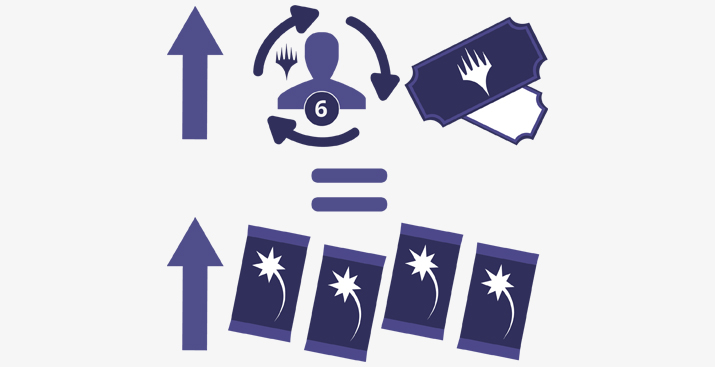 Our original notion for the Promo Packs was to prize 3–0 finishers with a promo pack, rather than the three boosters (one pack per win) we usually do.

This plan seemed good. 3–0 finishers are happy, since players already regard one Promo Pack as a better value than three booster packs. Plus, that's fewer booster packs we're handing out at events, which helps offset other costs. Done and done, right? Let’s whip up that announcement and tell the world!

Oh, but wait. A closer look told us that this model might be broken, because it leaves space for players to coordinate and maximize their value.

While a new 3–0 finisher is generated every eight players, the second 3–0 finisher appears as soon as you hit nine. We don’t have to wait until the 16th player—another promo pack gets added immediately. Some savvy team members pointed out that this incentivizes events of either nine or seventeen players.

Maximum value for players, but worst possible value for the store. Not the win-win we want!

The solution? We "unlock" a promo pack when an event launches at eight players, then "unlock" another promo pack every six players thereafter. This keeps us on target for the average pack-to-ticket ratio we want (one pack for every seven Tickets, though this will differ based on your allocation).

But who gets the Promo Packs under the "unlock" framework, if not 3–0 players?

“Random player” in Wizards Event Reporter gets the Promo Packs. I want the developing players to enter my events. I want the learners, the hungry hopefuls. I want them to “study and grow strong,” as the Magic Dojo once taught.

Now let's tackle a few questions that are bound to come up.

What If Your Allocation Changes?

The nice thing about the Promo Packs is they're based on your metrics, not just which events you schedule. Which means you get a higher allocation for higher attendance.

But it can also mean the opposite. What then?

This general framework should scale down just fine, provided you don’t prize out the Promo Packs for Modern or Legacy or other formats that aren’t key metrics. But if you’re afraid of hitting a shortage, just set your unlock thresholds one or two players higher than I did.

Should You Open the Packs?

I recommend handing out the packs sealed, if you can.

We’re allowed to open them—and do it in front of the players if you must; nobody trusts a repack—but the promotional value of the pack and the perceived integrity of the store is maximized when you hand over the genuine article unopened.

Remember what Mark Rosewater taught us: it’s better to maximize a player’s happiness some of the time than to try to minimize a player’s unhappiness most of the time. Players will remember the peak experiences. The one week that greenhorn got a promo pack will make a big impression in their mind.

What If You Run Out?

What happens if you run out of packs before end-of-season? I suggest doing the customer-service thing and substituting a booster pack that’s higher than regular value, like Modern Horizons. Announce that change in advance with your event marketing. Most players will understand if you are up-front about it.

This really shouldn’t happen too many times, if at all. If it does, it means you had far more players than expected this season, so you surely earned enough extra revenue to offset the cost of those substitutes.