We're encouraging stores to run at least one Two-Headed Giant event for their Oath of the Gatewatch Prerelease and Launch Weekend events. Here are some tips from D20 Games owner Ben Calica, who has run more 2HG events in his store than any other retailer in the WPN.

Two-Headed Giant is our secret weapon.

It not only brings in new people to our events, but it can transform a skeptical loved one into a fan.

Who Is 2HG Good For?

The Two-Headed Giant format is like tandem sky-diving. As long as one player knows what is going on, the other can come along for the ride.

It's great for three groups: buddies, couples, and parent/kid combos. For regular players, it’s the best way to turn someone they care about on to Magic, and for retailers it can both bring in new people, and turn a regular player’s skeptics into customers.

Take the case of the mom who reluctantly came in for a 2HG event with her then 11-year-old son. She was thrilled with the one-on-one time with him. He had gotten to the "Aw, Mom" stage, but because she was sharing his beloved Magic, he was willing to hang out with her for the night.

Before long, this mom was a regular with her son, even bringing in her younger daughter. One night, to our (and her) surprise, she bravely came, sans kids, for FNM. She (finally) pulled in her husband. They became regulars at Prereleases, and purchase a weekly booster for each member of their pack.

Because of experiences like this, we've been running 2HG almost every Saturday for over three years. Here's what we've learned to make it work well: 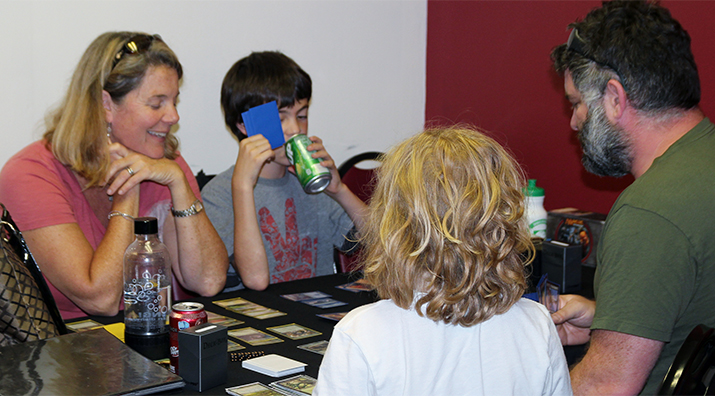 Gently remind experienced players not to use their partner as a living card stand. Instead have them ask their partners each time what they would guess the right play is. New players should feel they are figuring out how to play and get to feel good about what they are learning without pressure.

Games can bog down because of lack of player-to-player communication. Remind players to ask each other if they are done with each phase and then tell the other team.

Remember the key to success with a new player is removing that sense of pressure to "get it right."

Frequently, the new player didn't come to play Magic. They came to share time with a person they care about, doing something the other person loves.

Get that person on board, and it will lead to more business and more loyalty from the customers you already have, not to mention the potential of new ones.

Cliché as this sound, if we run Two-Headed Giant with care, this is a version of the game where even the store owner gets to win.

By Ben Calica, owner of D20 Games in Alameda, CA.

New to Running 2HG in Your Store?