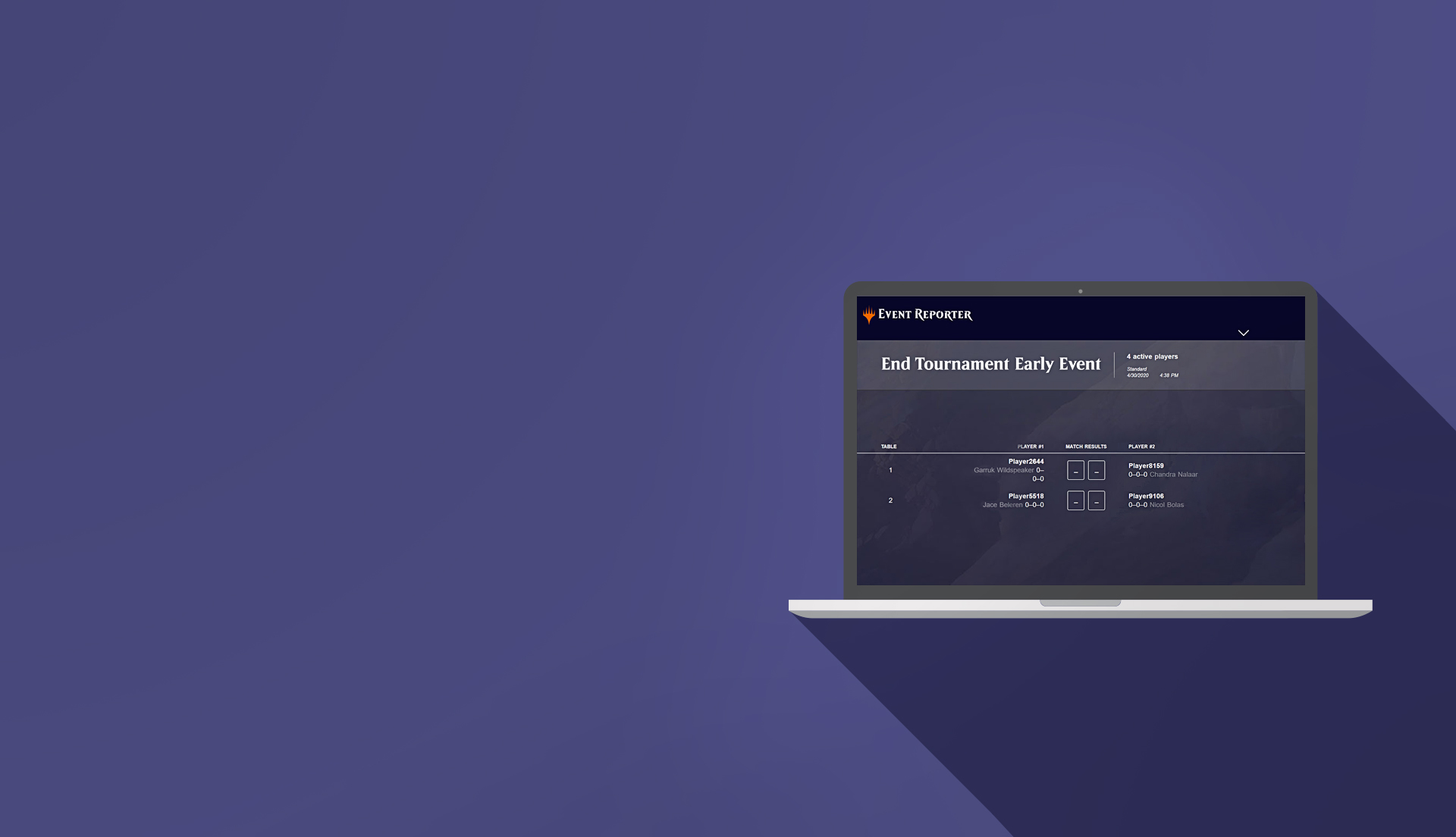 Get the latest on Wizards Eventlink updates, bug fixes, and upcoming features.

Get the latest on Wizards Eventlink updates, bug fixes, and upcoming features.

The team has been hard at work preparing the Magic: The Gathering Companion and Wizards EventLink applications for our WPN retailers! I’ve got a lot to share with you today about new features, bugs, and what’s coming up next for both Companion and EventLink so let’s dive right in!

Companion Available for All iOS Users

Many of you utilizing Magic: The Gathering Companion have noticed some players have been unable to download the app if they’re using an iPhone. We’ve been able to solve this issue for your players by releasing the app early.

While it’s not quite what we would call “complete,” this does remove any restrictions your iPhone players had in downloading the app. You can download Companion for iOS here.

(Note: Android users don’t have this restriction in place so we’re still in the Open Beta phase on that platform. Your players aren’t restricted in being able to download it. You can find Companion on Android here.)

We’ve gotten great feedback directly from our retailers about their experiences using EventLink. Many of you have offered up perspectives on things you like, things you’d like to see added, things you don’t like, and bugs or issues you’ve experienced while using the app.

This is extremely valuable feedback to a development team because it helps us see things we might otherwise miss. To make this as easy to provide as possible we’ve created a direct feedback channel within EventLink.

From the header of any page in EventLink you’ll see these options, from which I’ve highlighted “Submit Feedback:”

Clicking that link opens the Submit Feedback dialogue which sends the feedback and rating directly to us. While we may not be able to respond to every single message directly, we do review every single thing you take the time to send us. Your feedback truly is extremely valuable. 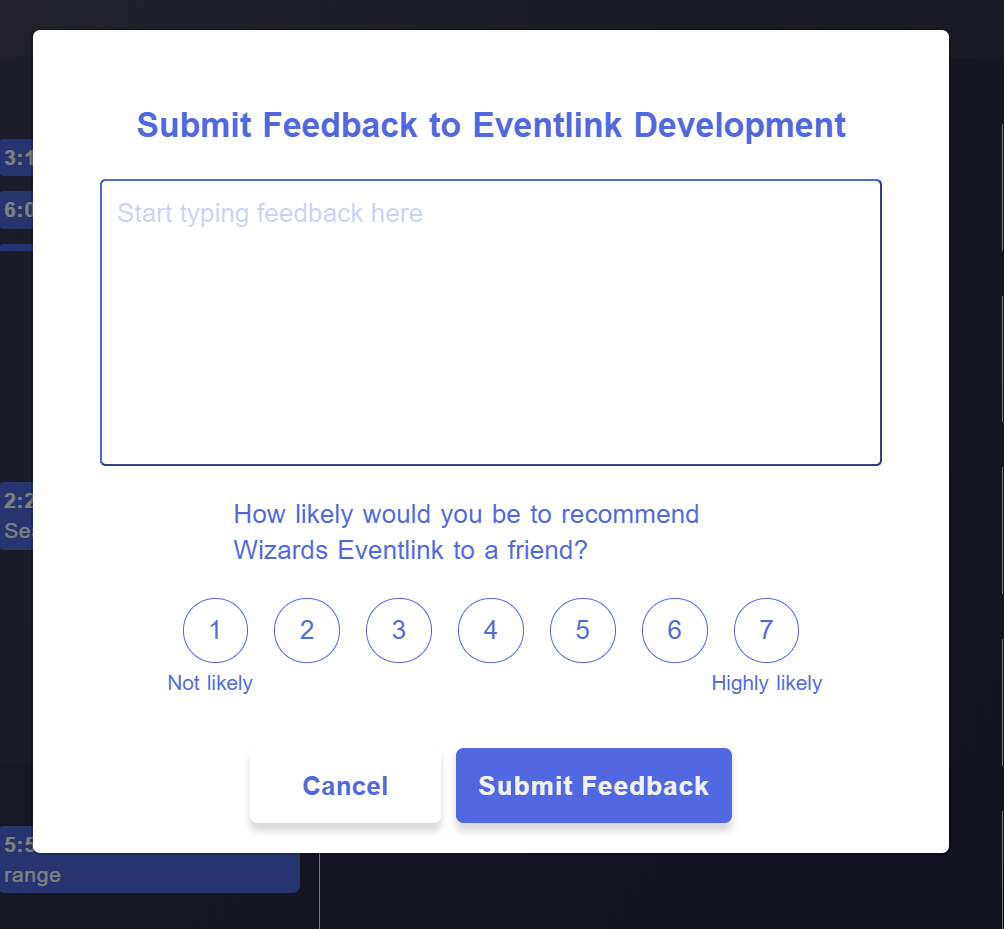 EventLink and Companion in Your Preferred Language

EventLink and Companion are now localized in every language Magic is published in. Both products will automatically display the language you have set in your browser or mobile device so you shouldn’t need to make any effort in order to display things properly.

One of the big pieces of feedback we’ve gotten from retailers has been the pain point of needing to refresh EventLink frequently to see the most updated information about your event. For events in which multiple staff members are operating EventLink at the same time it can be frustrating to not see information appear automatically as it changes.

In software development speak this is called “concurrency:” data appearing concurrently across multiple users and/or devices. To solve that problem the developers have been hard at work hardening our backend to ensure we can display data concurrently.

You no longer need to refresh EventLink to see updated information during the following phases of running an event:

More concurrency updates are planned in several sprints after we roll out a few more features that are a bit more urgent. We’ll be focusing on concurrency for match results reporting next once we’re back to working on this feature.

A bug had been preventing players who earned a bye from being dropped from an event during the round they received the bye. This can be frustrating for both tournament staff and players as a player with a bye frequently desires to drop so they can play more Magic with other players in your store or by joining one of your other Magic events.

This bug has been fixed and you can drop players with byes just like any other player. Here’s what it looks like:

On Demand Events and the Calendar

On demand events, those which aren’t “scheduled” and don’t appear in Store and Event Locator, previously rolled forward to whatever the current date was no matter what the event’s status was. Now those events remain on the day in which they’re concluded so you don’t have an ever-growing list of events following you around in EventLink.

We’ve had many requests for controlling the length of your tournaments by determining how many rounds you’d like to run. We’ve previously added the ability to end an event early and you can now also extend your event by adding as many rounds as you’d like. When you get to the end of an event, you’ll see this option:

By selecting “Add Round” you’ll see this: 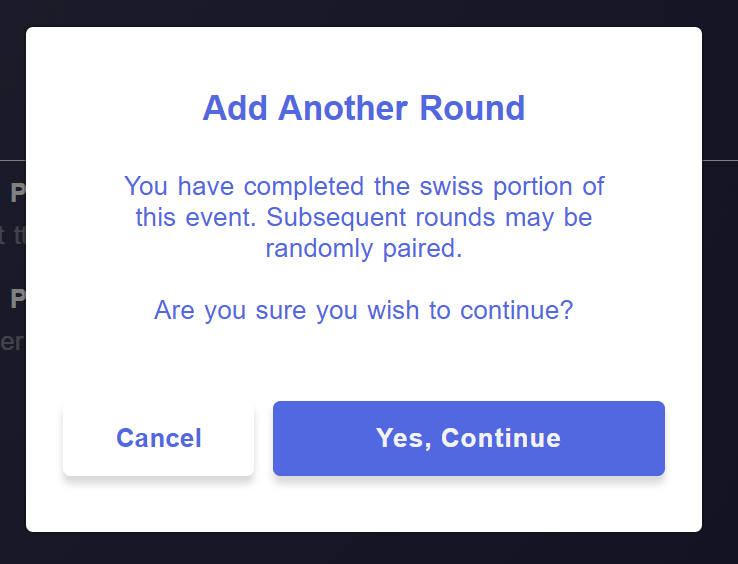 Clicking “Yes, continue” starts your next round. You can add as many rounds as you’d like, though a word of caution: adding additional rounds to a Swiss event will eventually cause the pairing algorithm to break. To prevent you or your players from being unable to continue the tournament EventLink will automatically shift to pairing players at random to ensure everyone can keep playing.

Later we’ll look at implementing a user experience that allows you to set your desired number of rounds up front before the event begins. Until that time, we wanted to make sure you had the functionality you needed. Now you can both end your events early and add rounds to extend them based on your needs for meeting your customer’s expectations.

A bug that caused tiebreakers to be incorrectly calculated has been fixed.

This bug was reported to us by sharp-eyed retailers. As I’ve said many times: the feedback you send us directly is some of the most important we receive in helping us catch issues like this that might otherwise go unnoticed. Thanks to everyone who has taken the time to submit their thoughts.

We’ve delivered a lot of new content since I last wrote and we’re hard at work on what’s coming next. The two features we’re most focused on right now are the current #1 and #2 requests we’ve heard from retailers: late player registration and round rollback/error fixing.

We expect to have those delivered in the next few sprints, the two-week cycles in which we build a new release for EventLink and Companion. These items have always been planned, but with so much other work completed it’s finally time to bring them to the forefront.

Late player registration will allow you to add a player to your event no matter what stage the event is in. Using the interface, which I’m excited to show you soon, you simply register the player who is then automatically awarded a loss for each round that has already concluded or gotten underway.

If you have an odd number of players and one player received a bye you can still allow the player with a bye to play your late registered player for fun, but the late registrant won’t be able to have the match count towards their record.

This is based on customer feedback from our old system in which players who were on time for events and rewarded with a bye felt “punished” when a player who was not on time could waltz in late and “undo” the win the other player felt they had earned.

This is a change in functionality and an intentional one that puts the impetus on late players to adjust their behavior instead of punishing players who followed the rules. You’re also able to add a player as a late registrant no matter what round it is. If you have a ten round event headed into the eighth round and for some reason a player wants to pay you to join, you’ll be able to let them!

Fixing errors in your events is another item we’ve had many, many requests about. It has always been our intent to include that functionality, though our data shows that less than 1% of matches historically have had an error that needed correcting.

Nicknamed the “round rollback” feature, it will allow you to move from the current round back one round to fix a mistake, like a match result that was entered incorrectly. If you choose to move backwards, you’ll lose the progress from the current round but EventLink will automatically re-pair that round when you move forward again.

You can’t go back further than a single round to fix errors, but Magic: The Gathering Companion will significantly reduce the work you need to enter the results and ensure players themselves can not only enter the match results but also verify they have entered them correctly. That wasn’t possible in the old events world without involving you or your staff to manually look up the information and contributed to match entry errors.

The reason we made the decision to shape the feature in this fashion is because rolling a tournament back multiple rounds, changing data, and trying to cascade the change forward causes huge amounts of technical risk.

As much as 70% of the technical costs associated with maintaining the classic tournament software you previously used to run your Magic events was related to issues caused by this functionality. For less than 1% of match results that even experience the problem in the first place it simply isn’t worth the instability caused by going back many rounds.

Another way to think of it: fixing errors for less than a single percentage of matches cost us 70% of our resourcing that could have been spent on features to help reduce your workload and grow your business.

By ensuring you can go back a single round without having to cascade changes throughout the tournament we can provide a solution for the most common match reporting issue. We’ve also built Companion to empower players to take ownership of this responsibility and ensure they can verify the result from their match was added properly.

These solutions together will help us create a more stable EventLink and a better experience for all. Until we meet again, keep that feedback coming!