Phoenix Comics and Games has earned a reputation for their welcoming, inclusive culture—especially for women and the LGBTQ community. Here’s how they did it.

Phoenix Comics and Games has earned a reputation for their welcoming, inclusive culture—especially for women and the LGBTQ community. Here’s how they did it.

Seattle gamers have over forty WPN stores to choose from, including some of the world’s best. But even in an impossibly competitive scene, Phoenix Comics and Games earned a glowing reputation virtually overnight.

Their customers will tell you it’s because of the safe, inclusive culture they’ve created—especially for women and the LGBTQ community. We asked owner Nick Nazar how he did it. Here’s what he had to say.

When I opened Phoenix Comics and Games, I wanted to create a place where people from any walk of life would feel welcome. Being a part of the LGBTQ community myself, it was important to me that no one felt judged on the basis of their sexual preference, race, gender, or religious beliefs.

Beyond being important to me personally, that idea has become a big part of our identity, and one of the reasons our customers choose us from the many great stores in the area.

Here’s how we do it:

Some folks feel better just having rules posted. Ours make it clear that homophobic, sexist, or transphobic remarks will not be tolerated.

Once you’ve created a code of conduct, you’ve got to enforce it. One thing I do is walk the tournament area and listen. If I hear someone violating the code, I ask them to have a talk with me in private, where I communicate in no uncertain terms: if the behavior continues, they will not be allowed to return. 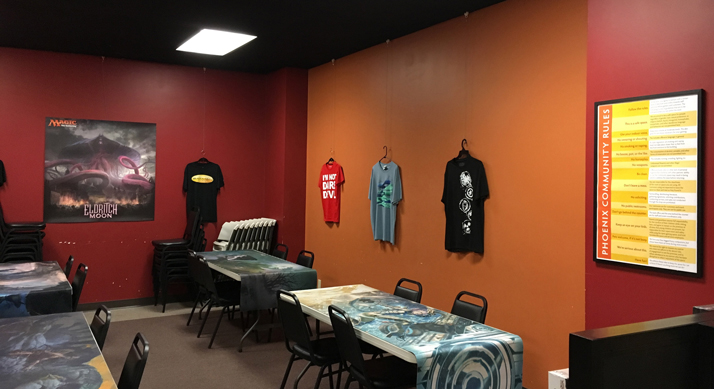 Your staff should be partners with you in fostering diversity and inclusivity, and it’s pretty easy.

First, we greet every customer. We give them a minute to explore, then we follow up: “Hi there, did you need help finding anything? No? Well, if you do, just let me know.”

Second, we give them space. This way, no one feels like they're being profiled, or that they’re being treated like a curiosity or a threat because of their race or gender.

Third, we avoid honorifics like “sir,” and “ma’am” and use gender neutral pronouns like “they” or “y’all.” This is mostly out of consideration for our trans customers, but you’d be surprised how often people notice and appreciate it.

Being a safe space means creating a sense of physical safety, too.

For example, we keep at least three feet between displays so that folks can browse without bumping other customers. It may sound small, but this is huge for anyone with personal space concerns.

The same principle applies to events. Here’s our technique for spacing out tables:

This creates enough space for players to move about without colliding.

This is one of the easiest ways to promote diversity in your shop.

Look online for local LGBTQ-friendly groups and reach out to them. If someone comes to you with an idea for an event targeted at a minority, give them your full support.

That’s how we ended up with the Seattle Ladies Comic Book Club, a discussion group that meets at our store. The organizer approached me, and I agreed to host and help promote the event. Now the group includes 20-30 women, lots of whom have subscriptions and are regular customers.

Things like that have become what players think of when they think of our store, and many of them are drawn to us for that reason.

It comes down to respecting everyone who walks through the door, and making extra effort to make sure they feel included.

By Nick Nazar, owner of Phoenix Comics and Games