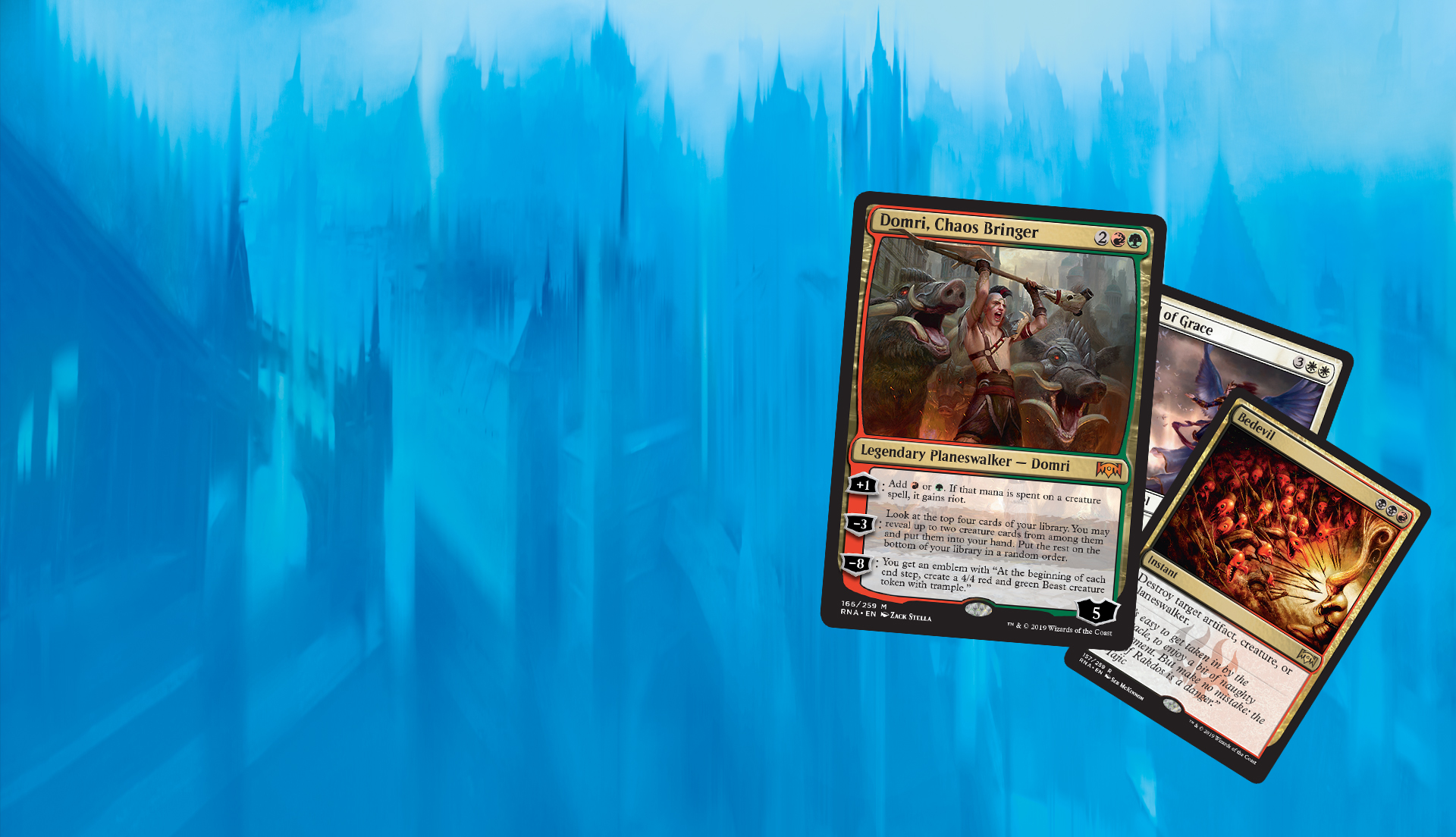 These ten must-see cards highlight the brilliance of Ravnica Allegiance.

These ten must-see cards highlight the brilliance of Ravnica Allegiance.

Ravnica Allegiance brings a host of powerful, unique, and desirable cards to the table. Understanding what makes the set so appealing will help you communicate the right information to the right players. 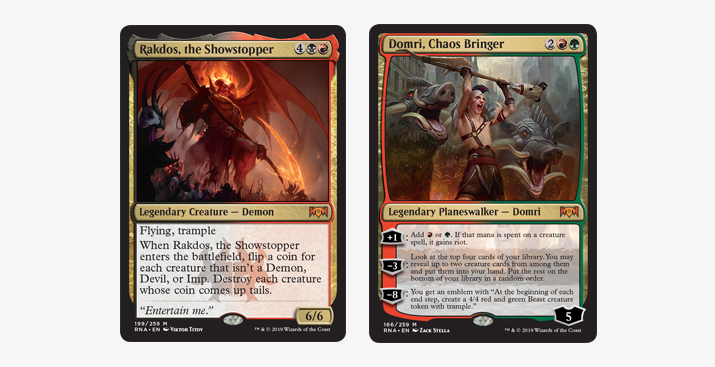 Rakdos, the Showstopper makes an entrance—flipping coins and cleaving the battlefield in half. The right setup means perfectly balanced carnage, leaving the game in your favor (as it should be.)

Recently, green Planeswalkers have been giving Standard decks resilience. Domri is a control player’s nightmare—arriving on turn four and drawing up to two cards a turn. He’s a card advantage, mana-ramping, game-dominating machine.

Plus, beloved past incarnations of past Guild Leaders, such as Isperia, Supreme Judge and Ruric Thar, the Unbowed headline the Guild Kits with epic alternate art. The product releases on February 15 and will delight flavor enthusiasts and longtime Ravnica fans.

Callbacks with a Twist 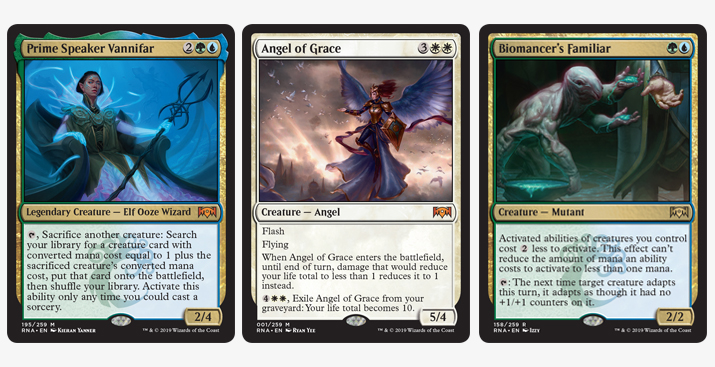 Biomancer’s Familiar allows Simic players to use their signature “Adapt” ability again and again. It has all the power of Training Grounds—a sought-after card—and it’s a solid creature to boot.

Angel of Grace is a callback to Angel’s Grace, but it does a whole lot more than just buy you time. It shows up, saves the day, and then suits up to beat down.

Prime Speaker Vannifar may be new to the job of Simic guild leader, but she has an incredible resume. Her tap ability will remind veteran players of Birthing Pod—a notorious card currently banned in Modern—making her a must-kill threat. 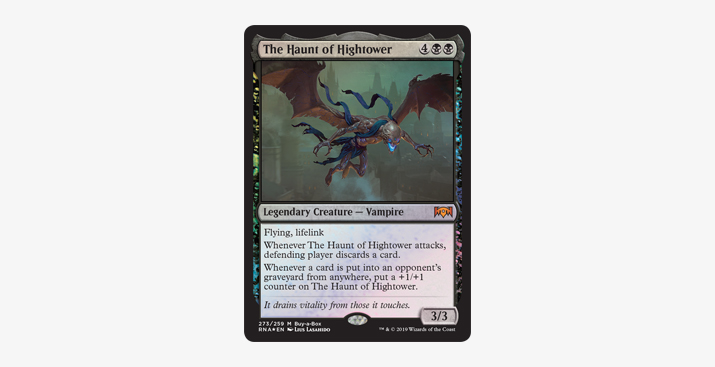 The Prerelease Early Sale Promotion returns yet again, and you’ll be able to hand The Haunt of Hightower to players who purchase a booster box in your store. It'll be a draw for both Commander and Standard players.

Check our marketing materials page for Buy-a-Box advertising materials so you can solidify the message: preorder a Ravnica Allegiance box now, pick it up at Prerelease, and get a Standard-legal rare not found in boosters. 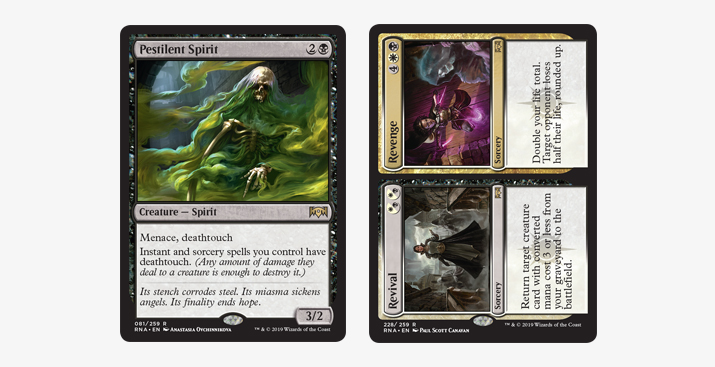 Pestilent Spirit represents an all-new way to play Magic. It turns every point of damage from an instant or sorcery spell into a lethal amount. Deckbuilders rejoice!

The split cards once again deliver, but in terms of downright cool, Revival//Revenge tops the pack. Commander players love doubling or halving life totals, but this card does both! Plus, Revival provides clean early-game utility.

So Much Raw Power! 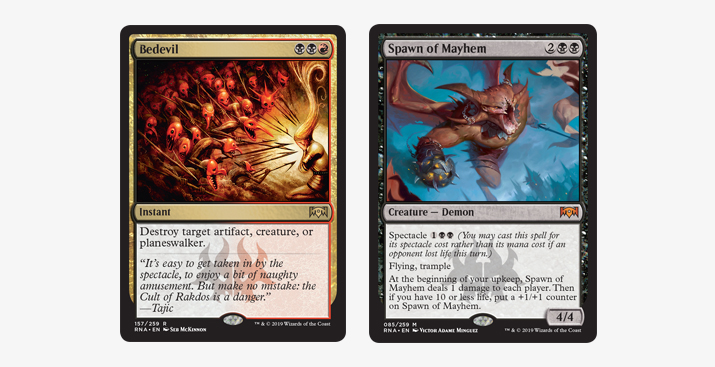 Spawn of Mayhem will be bringing the beats all early and often. If your deck plans to attack, you’ll likely be paying its alternate casting cost. That means a 4/4 flying trample demon as early as turn three. And it powers out future Spawns of Mayhem to boot!

In discussions of Bedevil, comparisons to Dreadbore and Hero’s Downfall have been made. Bedevil does it all and more—taking down artifacts at instant speed. Don’t be surprised to see Bedevil in Commander and Modern games at your store soon.

Ravnica Allegiance brings the heat. It's bound to shake up the Standard scene and entice players of all stripes. Engage your players by discussing favorite cards on social media!