Here's what you can sell for this Dungeons & Dragons crossover Commander set.

Here's what you can sell for this Dungeons & Dragons crossover Commander set.

Magic: The Gathering's second Commander-focused set takes players directly to one of the most popular locations in D&D, Baldur's Gate. Commander Legends: Battle for Baldur's Gate combines the casual fun of Commander with a unique drafted Prerelease experience to take multiplayer Magic to the next level.

Here you'll find a reminder of upcoming dates to mark on your calendars, as well as what's available with this set so you can prepare to host even more epic Commander events at your store.

What to Sell at Prerelease

Prerelease week is the time for your players to get their hands on the latest set for the first time—and with this crossover focused on Commander play, you can draw interest from both your Dungeons & Dragons fans and your engaged Magic: The Gathering players.

As usual, your store will have an allocation of Set and Draft Boosters depending on your region to use for Prerelease Early Sales. Take this time to encourage players interested in exploring what this set has to offer through Set Boosters.

We recommend you use these Set Boosters for participation at Prerelease and use any extras to incentivize your players to bring their friends along, or as a reward to players who help others build decks.

WPN Premium stores will receive an allocation of Collector Booster displays for sales during Prerelease week. 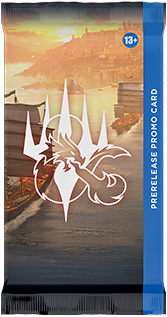 For Commander Legends: Battle for Baldur's Gate, the Prerelease Pack is a little different from the average Magic set.

Each Prerelease Pack contains the following:

A Dungeon Card is a unique card that shares the same mechanic as Dungeon Cards from Adventures in the Forgotten Realms: the card is not included in a player's deck size or sideboard and is activated by the Initiative mechanic.

However, keep in mind that the Adventures in the Forgotten Realms Dungeon Cards are not making a return for Commander Legends: Battle for Baldur's Gate.

Please note that your allocation of Prerelease Packs will not be as large as typical prerelease allocations. You will be allocated a percentage of your largest recent Prerelease, which will vary by region and is based on relative Commander popularity.

What's in Your Marketing Kit

Your marketing kit will help boost your efforts in sharing the hype of the second Commander Legends set to draw players and their friends to your store. After all, this crossover set is multiplayer-focused, just like Dungeons & Dragons itself. 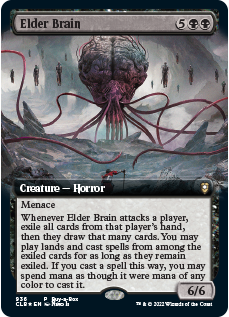 Customers can receive a Buy-a-Box Promo with sales of any of the following: 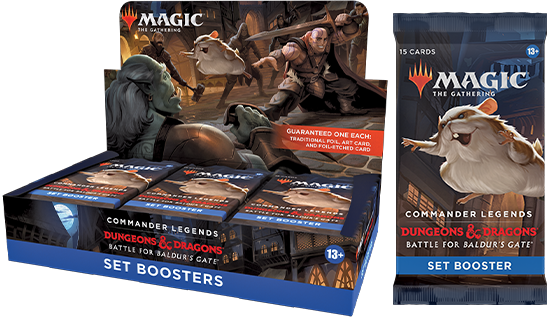 Set Boosters contain 15 Magic cards per pack and are the ideal booster to open just for fun. Players interested in exploring the Magic Commander cards from the world of Dungeons & Dragons will want to dive into Set Boosters first. 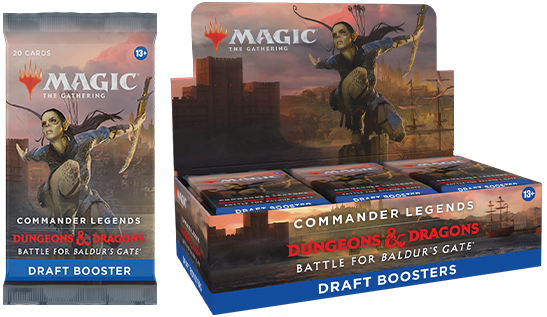 Draft Boosters contain 20 Magic cards per pack and are what many players will open during the unique Draft format at Prerelease. Unlike a typical Prerelease, players will draft 2 cards at a time to build a 60-card Commander deck to prepare for multiplayer madness. 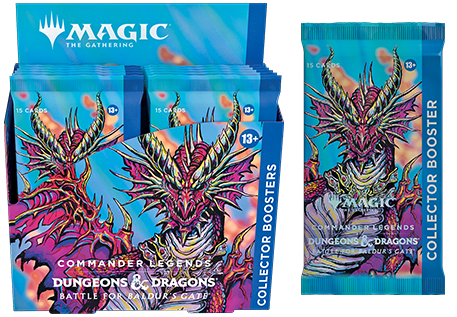 Collector Boosters contain 15 Commander Legends: Battle for Baldur's Gate cards along with the opportunity to obtain exclusive Extended-Art cards. For your D&D players who want to crack into the shiniest Commander cards on this side of Faerûn, send them directly to your Collector Boosters.

Not every player has to draft their 100-card Commander deck from scratch—there will be four Commander Decks available for purchase that are ready for immediate play:

Each Commander Deck includes an additional 2-card Collector Booster Sample Pack, to give your players the opportunity to preview the coolest card treatments from the set. The Commander Decks also introduce 10 Magic cards not found anywhere else for Commander Legends: Battle for Baldur's Gate. 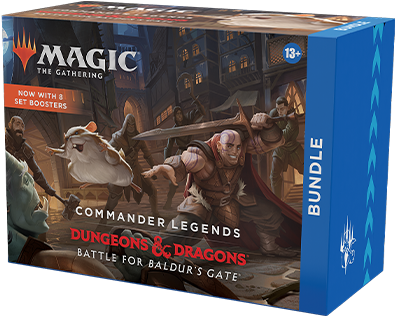 Bundles make perfect gifts for your most invested players who want to get the most out of Commander Legends: Battle for Baldur's Gate in one box.

The exclusive Promo included in Bundles is Wand of Wonder—remember, this alternate art cannot be found anywhere else. 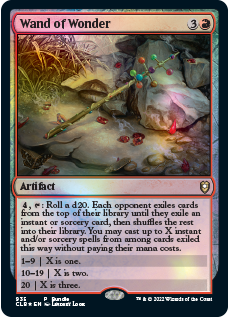 Are you ready for this epic crossover event? Scheduling is open in Wizards EventLink, so don't delay—get your events on the books and start encouraging your players to sign up today.

Before you download and use the official marketing assets on this page, please review the Wizards Play Network Marketing Materials Policy.