Our 30th anniversary celebration is just getting started—read up on what we've got planned.

Our 30th anniversary celebration is just getting started—read up on what we've got planned.

This year, Magic: The Gathering celebrates our 30th anniversary—and we're going all out on the party planning. The celebration will last more than a year, and we're launching promos, products, and partnerships throughout the next 14 months to commemorate our favorite game in every way we know how!

Today, we're reviewing the announcements and highlighting the most exciting ways for you to bring the birthday bash to your store.

As you know, we're releasing 30 promos across eight Prereleases from 2022 through 2024, one to celebrate each year of Magic. Seven of these 30 promos will be printed in one of the non-English languages Magic is printed in to celebrate our global fans. Every region will receive the non-English language promos in the language listed—for example, all regions received the German version of Fyndhorn Elves with Dominaria United.

Today, we're revealing nearly all the rest of our 30th anniversary promos, organized by the Prerelease event they'll be tied to.

Phyrexia: All Will Be One

March of the Machine

The Lord of the Rings: Tales of Middle-earth™

The final promo, tied to the first Prerelease event of 2024, has yet to be revealed. The final promo is one printed this year, 2022, and is unreleased; it will come out with The Brothers' War. Watch this space and Magic Daily for the reveal of our final 30th anniversary promo once the card has been previewed.

For your players on the path to qualifying for Pro Tour 3 in 2023 (Regional Championship Qualifier events for which begin in January of 2023), we'll be distributing these gorgeous alternate-art promo cards.

Dominaria Remastered Gets a Classic Promo

In case you missed it, we shared the initial previews for Dominaria Remastered, which releases in Q1 2023. This set is created from cards from releases of Magic's home plane, Dominaria.

Plus, you'll be able to draw fans to your store with the Launch Party and WPN Premium Preview Event promo, Counterspell. This promo brings back the original Mark Poole art and a retro frame that may strike a nostalgic chord with your community. 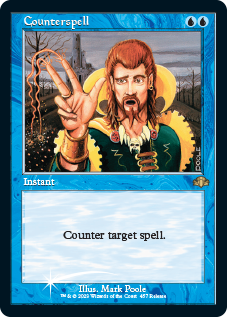 You can also begin sharing these early preview cards with your players to build the enthusiasm and give them a taste of what's to come.

More details about Dominaria Remastered are coming soon —keep your eyes peeled and start preparing your players for the release in the meantime. And for even more announcements on how we're going all-out with our 30th anniversary celebration, head over to the Magic Daily news feed.

Don't forget: two epic releases are coming this Friday, October 7—Unfinity and Magic: The Gathering Universes Beyond Warhammer 40,000 Commander Decks. Don't forget to schedule your Booster Draft events for Unfinity fans, and a Commander Launch Party for the Commander players in your community that are eager to play in a new setting.

Whether your players want to launch into the skies to attend the most whimsical space carnival of the season or travel to the grimdark universe of Warhammer 40,000, they'll have plenty of play opportunities to look forward to.

That's a wrap on the major announcements for ways the Magic 30th Anniversary celebration is coming to your store. Keep scheduling your events and fill your calendar with plenty of opportunities for your players to take advantage of all the releases coming their way.