The correlation can seem a bit murky, but getting customers to engage with you online directly affects the bottom line: consumers who connect with a brand on the web spend 20%-40% more money than consumers who don't.

It's a worthy challenge, and hard-won. So much so that U.S. businesses spent $8.5 billion on social media advertising in 2014 alone.

Some of your colleagues in the WPN have discovered ingenious ways to drive online engagement at a slightly lower price tag.

One of them is Highlander Games.

For each Prerelease, owner Scott Hughes adds a few special items to the prize pool—for example, long-out-of-print booster boxes like Innistrad and the original Modern Masters.

But there's a twist: he announces the winners in a Facebook video after Prerelease weekend is over. 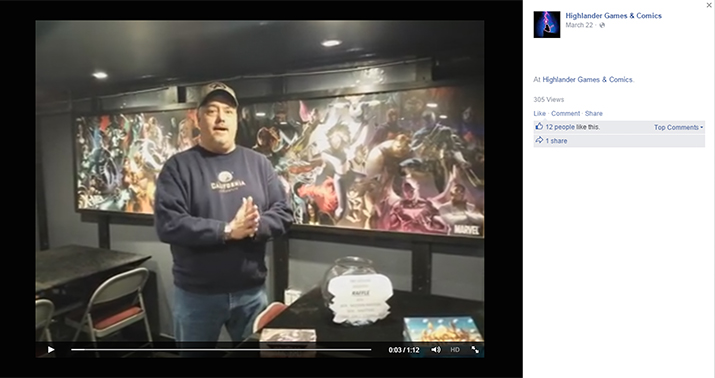 It's a remarkably efficient idea. It's low-cost. It capitalizes on the most web-friendly medium. It gets mileage out of WPN exclusives like Modern Masters, plus it neatly keeps all players eligible for the same prizes, even if they played in different events.

But here's the real success: these videos have earned several hundred views, including over 300 for this video alone. That kind of online engagement is tough to find.

And there's plenty of space for innovation within Scott's idea. Add a congratulations to the weekend's top players. Take a moment to give a shout out to some new faces. Personal recognition is a powerful tool.

On the other side of the world, another great WPN store is putting that tool to use in a big way.

For example, when Joel Larsson won Pro Tour Magic Origins, the Japanese retailer congratulated him with a celebratory drawing: 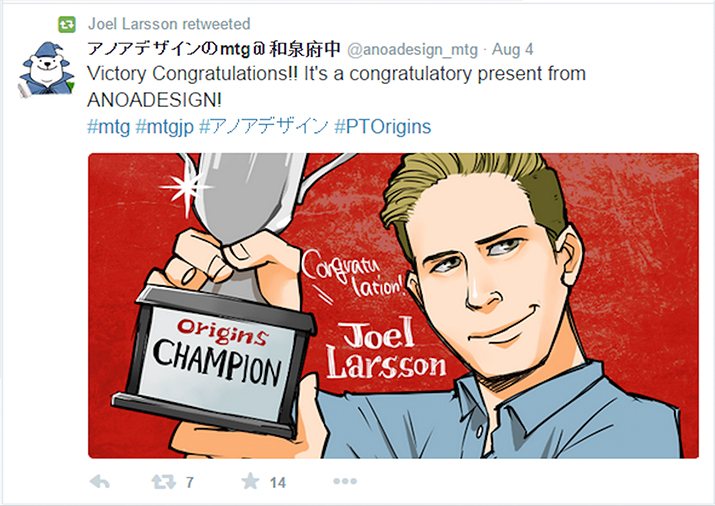 The classy gesture quickly became one of their most popular Tweets. Larsson even used it as his profile picture, earning exposure with his more than 2,000 followers.

But even if you can't draw stick figures, let alone Pro Tour winners, supporting Grand Prix and the Pro Tour online is a great community building effort. To celebrate Magic's champions is to celebrate the game; to engage with pro play is to engage with your own community.

1. Link players to coverage on twitch.tv/magic

Battle for Zendikar Prerelease is coming up on the 26th, and the Pro Tour starts October 16th. Try these ideas or come up with your own way to celebrate your winners!

How to Perfect Your Prize Pool