Transformers Roll Out to The Brothers' War Battlefield

The Transformers robots join the fight—learn how to bring in new fans with nostalgic appeal.

Transformers Roll Out to The Brothers' War Battlefield

The Transformers robots join the fight—learn how to bring in new fans with nostalgic appeal.

Colossal-sized constructs. Sparks. An epic clash of larger-than-life robots. The fate of the multiverse is at hand, and for one set, Optimus Prime is rolling to the rescue —and Megatron's army of Decepticons are hot on his heels.


Appeal to New Fans with a Familiar Universe

A total of 29 Universes Beyond Transformers cards will join The Brothers' War lineup, split between two of the franchise's factions: the righteous Autobots and the power-hungry Decepticons. Each Transformers card is double-sided, allowing them to "convert," helping Transformers fans feel right at home when they play with these cards.

Universes Beyond Transformers cards can be found in The Brothers' War Set and Collector Boosters.


The arrival of the Transformers cards brings a bonus for comic book fans: 14 of the characters are also featured using their designs from the comic series by IDW Publishing, Transformers: Shattered Glass, also featured in the Hasbro toy product line. These comics present a malformed reality, where Autobots are evil and Decepticons are heroic.

Each of the 14 Transformers: Shattered Glass robots appear in The Brothers' War Collector Boosters in traditional foil and nonfoil with alternate art and a special Shattered Glass treatment.

Share these cards with avid comic fans in your community to spark more conversations around the crossover and invite interested players to preorder Collector Boosters from you. 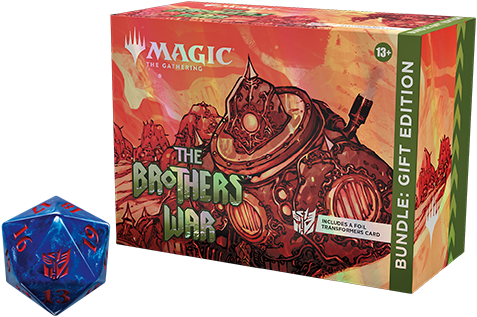 Whether the Transformers fans in your community have been around since its early days with the 1980s cartoon, are long-time toy collectors, or picked up the franchise later with the comics by IDW Publishing, you can welcome them to the Magic community with relevant products to have the opportunity to see their favorite bots in action.

Schedule Your Commander Party for The Brothers' War