The EventLink and Companion teams have been hard at work on our next major feature push: Two-Headed Giant (2HG)! This experience will be the first time that players can join a Two-Headed Giant event using their own device, as well as receiving pairings, standings, and reporting match results themselves.

Today I’m here to give you a sneak peek at what the new feature will look like in EventLink.

The EventLink events you’ve been running for months have two fields where players exist during registration: 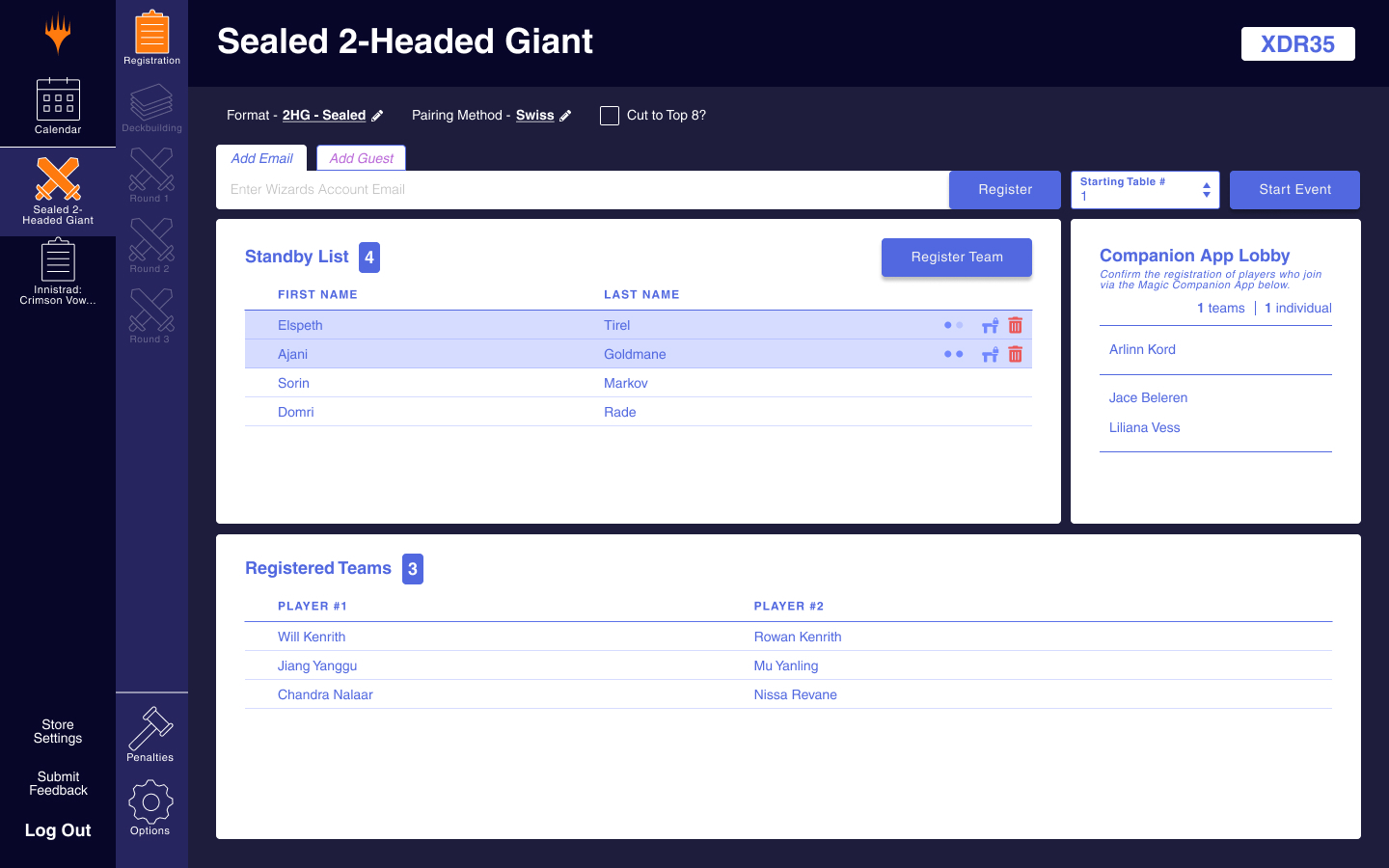 Here’s an animation of the process for creating a team in EventLink:

I’m very excited about this new functionality, and we expect it will deliver by the end of this year in December. We’ll be taking feedback on the feature. As always, you can use the “Submit Feedback” button directly in EventLink to share your thoughts.

The first Prerelease with Two-Headed Giant will be Kamigawa: Neon Dynasty in February 2022.

In the meanwhile, if you want to use EventLink to run a 2HG event now, try this workaround:


Finally, here are a few answers to questions we regularly receive from retailers about 2HG in EventLink and Companion.

How will team names be determined?

To prevent inappropriate names from being displayed during events, team names are automatically generated on behalf of players. Users don’t set what their team names will be.

Absolutely! Players join your event using an event code just the same as they always have. Companion will recognize the event as Two-Headed Giant and automatically prompt them to add any additional information that’s necessary.

Do both players have to use Companion to join a 2HG event?

The Magic Companion app is always an optional experience for users, including in Two-Headed Giant events. Zero, one, or two players from each team can use Companion and successfully participate in the event.

Note: For players not using Companion, you’ll need to manually add them to teams using EventLink and make sure match results are reported properly throughout the event.

Can players create their own teams?

Yes! Using the Magic Companion app, players can team up with one another automatically. To register them when they do so, you only need to ensure they’ve paid and add them to the Registered Players lobby.

Can I, the retailer, change or edit teams?

Absolutely. Final say in the makeup of teams always lies with event staff. It doesn’t matter if a team was made by players using Companion or by your staff. You can break up any team pairing and rejoin those players to other users at any time prior to an event beginning. You can also remove teams and players as needed, if a participant needs to leave before the event has begun.

When will Two-Headed Giant be available in EventLink?

The Dev team is hard at work, and we expect to have it released before the December holiday.