For our 30th anniversary, Magic: The Gathering is returning to its original setting—Dominaria. The return additionally marks the beginning of a story arc set to span the next four Standard set releases. It will be a great time to introduce new players to Magic so they can experience the story as it happens, while also having great nostalgic appeal for your most dedicated fans.

Below you'll find an overview of all the key dates you'll want to keep handy as we get closer to the start of the season.


It's never too early to get your planning underway, and we've got some exciting new experiences kicking off with Dominaria United that you'll want to keep in mind as you sort out your season's events.

Joining the Draft, Set, and Collector Boosters your players know and love, each Standard set release beginning with Dominaria United will include Jumpstart. This product is ideal for introducing new players to Magic, since all they need to do is open two packs and shuffle them together to start playing. 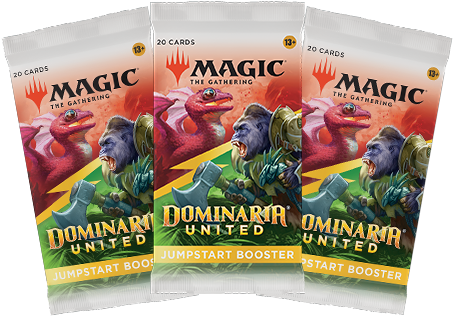 Jumpstart packs will be replacing Theme Boosters, but each Jumpstart pack can be one of several themes that help familiarize players with strategies available to them in Magic. Plus, Jumpstart packs for Dominaria United include a rare or mythic rare from the set and two foil basic lands.

Use Jumpstart packs to teach new players how to play throughout the season, starting with Jumpstart Prerelease.


What Is Jumpstart Prerelease?

For example, if you're reporting 16 players from your Prerelease, and 10 of them used traditional Prerelease Packs and six used Jumpstart Prerelease packs, you would report two separate Player-List Only events with the corresponding number of players.

Event scheduling for Dominaria United opened May 12, meaning you're able to prep your calendar for the fall season right now! Explore the events currently open and start building a schedule that works for your community.

The return to Dominaria and introduction of Jumpstart packs is just the beginning of what's in store for Magic's 30th anniversary celebration. Keep your eyes on this space as we reveal more ways to celebrate Magic in the coming months.

How to Plan a Jumpstart Prerelease Event