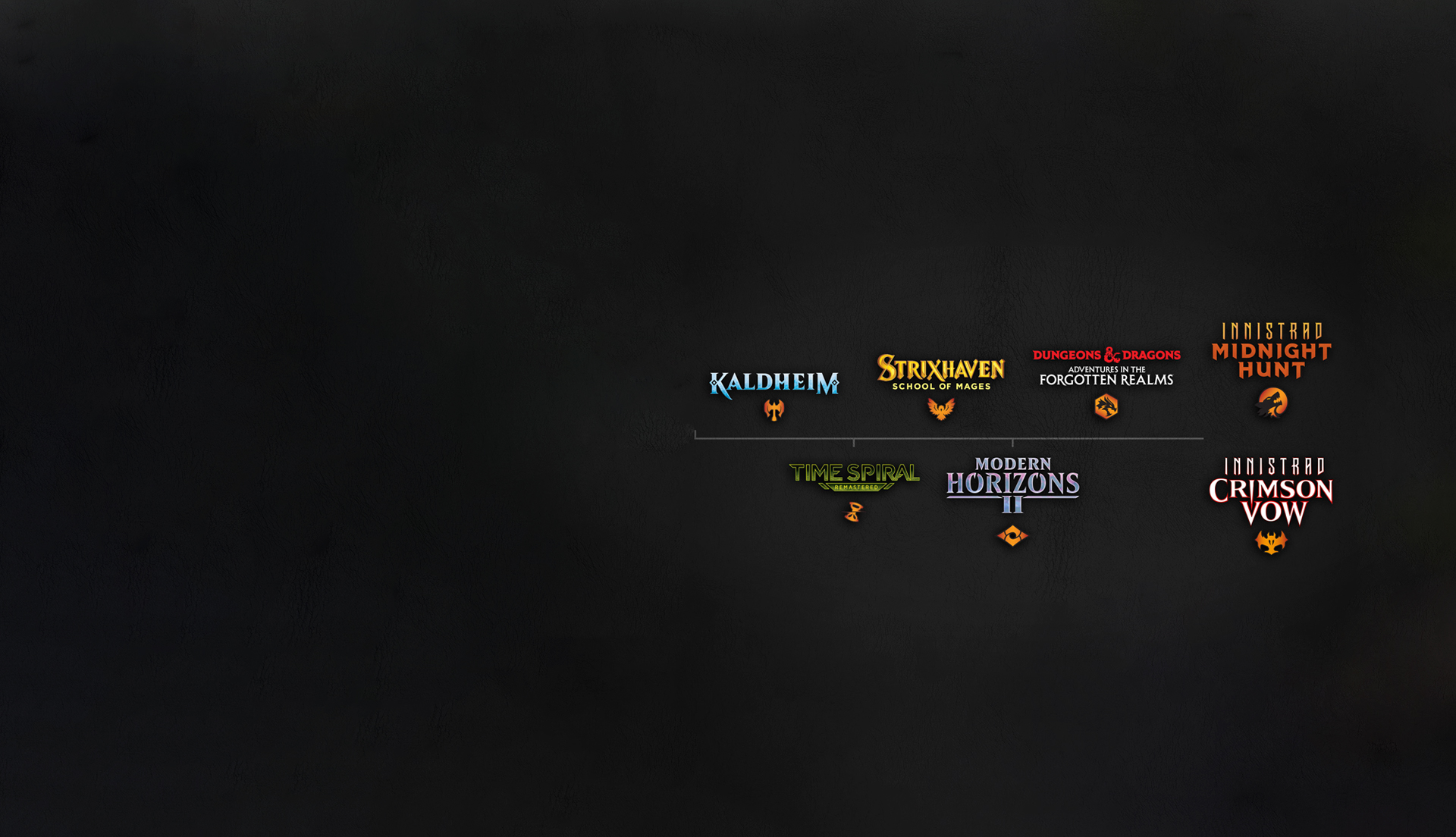 Four Magic: The Gathering sets are still to come this year—here's everything to know so far.

Four Magic: The Gathering sets are still to come this year—here's everything to know so far.

Strixhaven: School of Mages is only what's next for Magic in 2021—there's much more to come!

Here’s a rundown of what to expect. 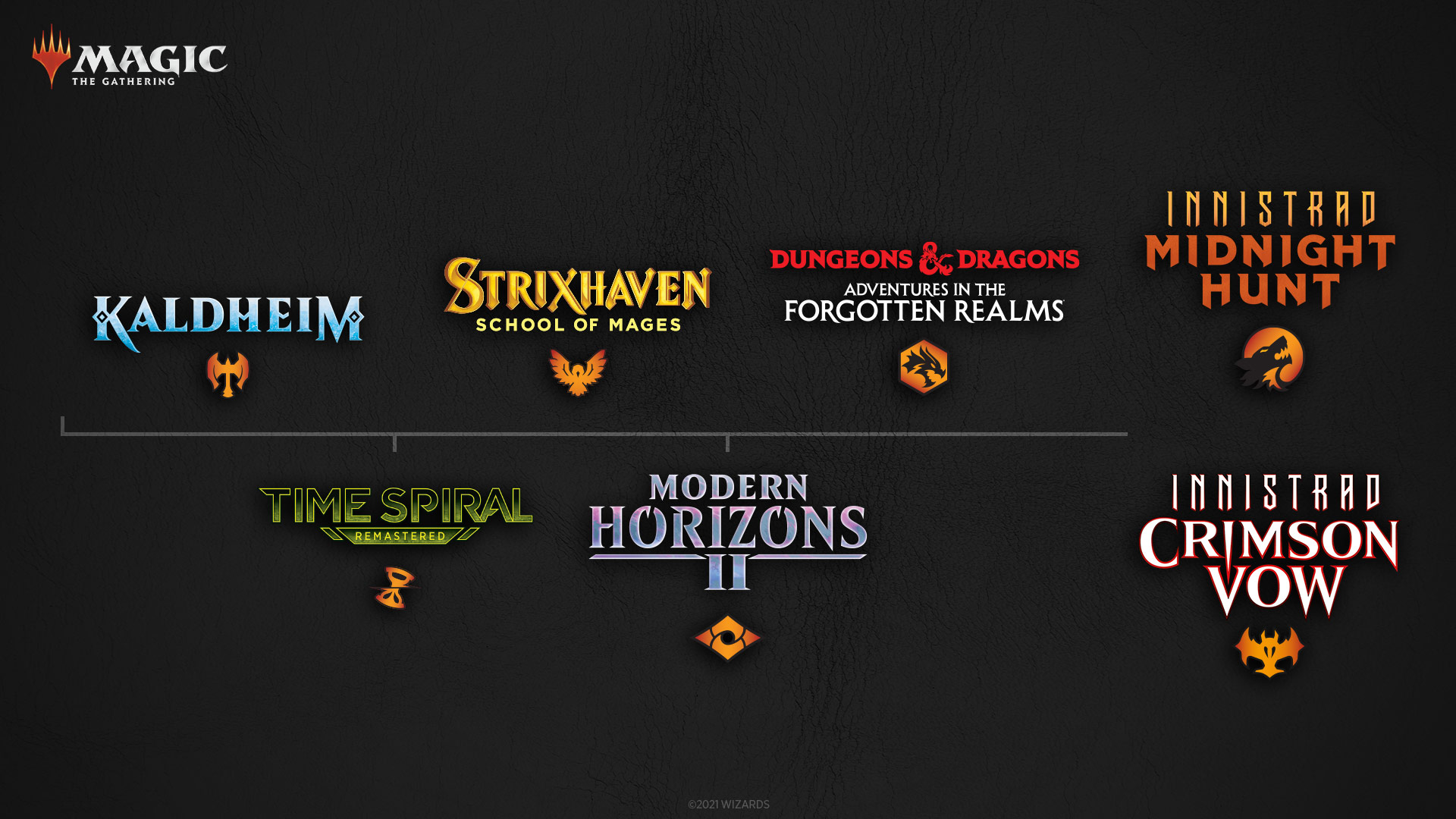 Modern Horizons 2 is our follow up to 2019’s Modern Horizons and second straight-to-Modern legal set. We wanted to delight players excited by higher power level and greater complexity with even more of what they loved in Modern Horizons.

Modern Horizons 2 includes awesome frame treatments (that we’re not ready to talk about just yet) and a full range of products, including Draft Boosters, Set Boosters, Collector Boosters, and Prerelease Kits.

Did we mention there’s going to be a Prerelease this time too? There are new cards, amazing artwork, special frame treatments, and more ways to collect. No matter what your fans like to play, there's an awesome card for their favorite deck in this set!

Adventures in the Forgotten Realms—Releasing July 23

We begin our journey in Faerûn with Adventures in the Forgotten Realms—the first time we’re bringing the world of Dungeons & Dragons to a Magic: The Gathering release.

Adventures in the Forgotten Realms is a set that promises to bring everything fans love about Magic mixed with the tropes and tools of Dungeons & Dragons for a flavorful and mechanically unique experience for players.

It’s an adventure unlike any you’ve seen in Magic!

Finally, as we close out 2021, we’re headed back to the fan-favorite plane of Innistrad. Our last visit was full of mystery with a twist on cosmic horror, but this time it’s a return to the roots of what made Innistrad an enduring fan favorite for years.

Packed with even more horror tropes and terrifying monsters, there’s so much to share that it’s not just one but two thematic sets to enjoy. When we revealed “Innistrad Werewolves” and “Innistrad Vampires” we weren’t quite ready to show off their names.

Now the wait is over.

Innistrad: Midnight Hunt promises to be a howling good time. By the silvery shine of moonlight, you’ll find plenty of packs to hunt for. What you’ll do if you find a pack of Werewolf creatures—or, more likely, they find you—is entirely another matter. (Good luck!)

Innistrad: Crimson Vow is a party unlike any you’ve seen before. This description is only a small bite—just a drop, really—of what to expect: the biggest Vampire wedding in Innistrad history.

There’s a lot of amazing Magic coming this year, and we’re looking forward to sharing details closer to each set’s release.

Before then, catch every moment of the Strixhaven: School of Mages reveals on March 25 on the official Magic YouTube Channel—your Magic fans sure will!—and make sure you've scheduled Prerelease to make the most of that excitement.